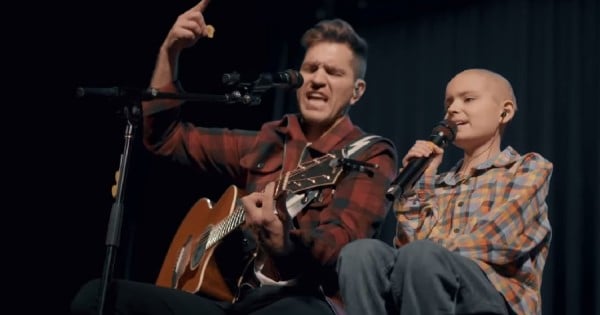 17-year-old Alex Miller on American Idol blew the judges away with his original country song. In fact, the audition impressed Luke Bryan so much, it left him praising the Lord!

As the American Idol video opens, we see Alex Miller playing guitar for a field of cattle. That's when we learn that this high school student is a fan of small-town living and working on his grandfather's farm.

RELATED: Luke Bryan's Make-A-Wish Reunion On American Idol Is Too Good To Miss

But music is his biggest passion of all.

"Music means everything to me. Whenever I was young, my parents divorced and it was a way for me to cope with that and release a lot of that energy."

For over ten years, Alex has been performing all over his neck of the woods and, now, he's ready to take those dreams to the big stage of American Idol.

RELATED: American Idol Contestant Francisco Martin Is a Bundle of Nerves Until He Sings And Then Wow

And from the minute he opened his mouth, the judges were struck by this personable young man. Alex played an original song an ex-girlfriend inspired him to write titled ‘I'm Over You, So Get Over Me'.

And just when I get you off my mind

You come crawling on your knees, falling, crying and begging ‘please'

The entire time Alex Miller was singing, the American Idol judges had the biggest smiles on their faces. And as the song ended, Luke Bryan exclaimed ‘Thank you, Jesus!'

Alex also impressed Lionel Richie. "I am thrilled. Your personality is just infectious."

Alex easily earned three ‘yes' votes from the judges but they wanted to personally deliver the good news to his family waiting back home. So, the entire entourage walked out of the audition room and stood in front of a large screen connected to Alex’s family through video chat.

YOU MAY ALSO LIKE: American Idol Emotional Audition Leads To Beautiful Moment Of Prayer With Judges

That's when he flashed his golden ticket to Hollywood to the cheers of his loved ones. Alex certainly made a name for himself with this initial audition and I'm so excited to see him in Hollywood Week.