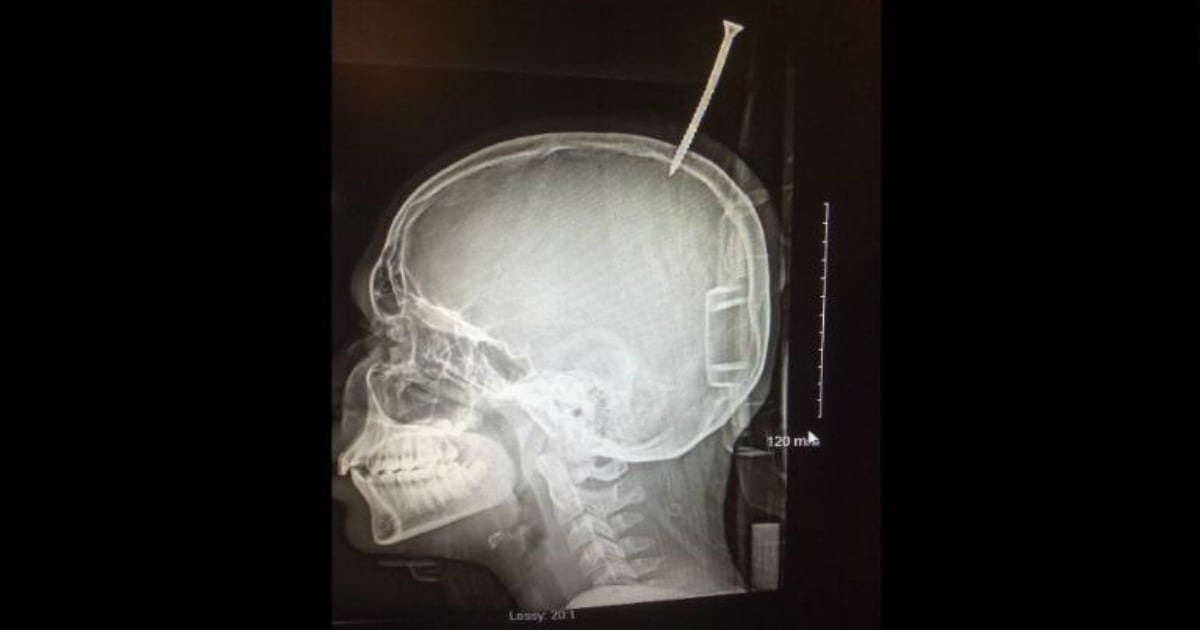 When Noah Connell was born, it looked like he had no jaw. Because of the serious breathing problems caused by his facial deformities, doctors never expected the infant to survive. But this precious boy keeps defying all the odds. He’s a living miracle as well as a medical first!

Nothing about Noah Connell’s bizarre story is typical. Even his arrival was a complete shock. His mom, Jade Gordon of Glasgow, Scotland, didn’t realize she was pregnant until doctors revealed her stomach pains were actually labor pains. Suddenly, just like that, she and her boyfriend, Kieran Connell, were parents!

Though Jade wasn’t expecting to become a mom just yet, baby Noah stole her heart instantly. But rather than getting to enjoy those first precious moments with snuggles, doctors whisked the newborn away.

"I didn't even get to hold him," Jade recalled.

Doctors Fearful For Baby With No Jaw

Doctors immediately knew something was wrong because Noah was born “looking like he had no jaw.” He spent the first five months of his life in the hospital and he still sees doctors on a regular basis. But it’s more than doctors ever expected for this sweet child!

Noah suffers from a rare medical condition called Hemifacial Microsomia, which means the bottom half of his face did not form properly. He also has Pierre Robin syndrome – a congenital condition causing facial abnormalities, which causes problems with feeding and breathing.

His case is so severe even daily acts we all take for granted can quickly become life-threatening. Even something as simple as swallowing his own saliva could prove deadly.

“He can’t eat or drink. Even one drop of rain could be fatal for him. And we spend hours giving him a bath because it’s so dangerous,” Jade explains.

As a result of his conditions, Noah has an underdeveloped jaw, small neck, floppy airway, a cleft palate and part of his spine missing. He’s fed a high-calorie solution each day through a gastro tube to help him gain weight.

Yet, despite the tremendous odds stacked against him, Noah just keeps amazing everyone. 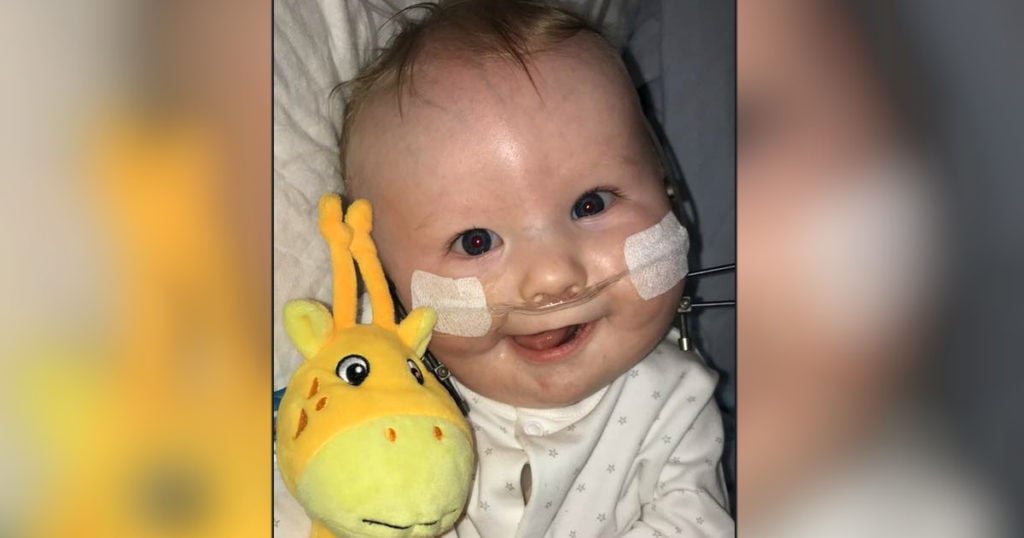 In fact, the little fighter recently celebrated his first birthday!

“It is a massive milestone for us and Noah,” Jade said. “We were told on numerous occasions that Noah wasn’t going to make it. For anyone, their baby reaching one is a big deal, but it was a bit bigger for us because we have had so many hurdles to overcome.”

But not only is Noah a living miracle, he’s a medical first, too!

Miraculous Operation Is A First

So far, Noah has undergone eight grueling surgeries in his short life. With each one comes the risk that he will never wake. But God has blessed this little one with the mighty spirit of a warrior!

When doctors began considering performing a tracheostomy for the boy with no jaw — where they would cut a hole in his throat — they decided to try something else instead. Something that’s never been done on someone so young.

The procedure, a ­mandibular jaw distraction, involved breaking Noah’s jaw in two places and inserting metal plates (in essence, “scaffolding”) into his mouth to straighten his face and push his tongue forward to help him breathe and reduce the risk of choking.

“We asked the doctors if we could see pictures from other surgeries like the one Noah was going to have, but they said they couldn’t,” Jade said. “We couldn’t believe it when they said Noah would be the first baby in the world to have the operation. It was daunting to hear that but we trusted them.”

And God made sure little Noah pulled through the intense operation! 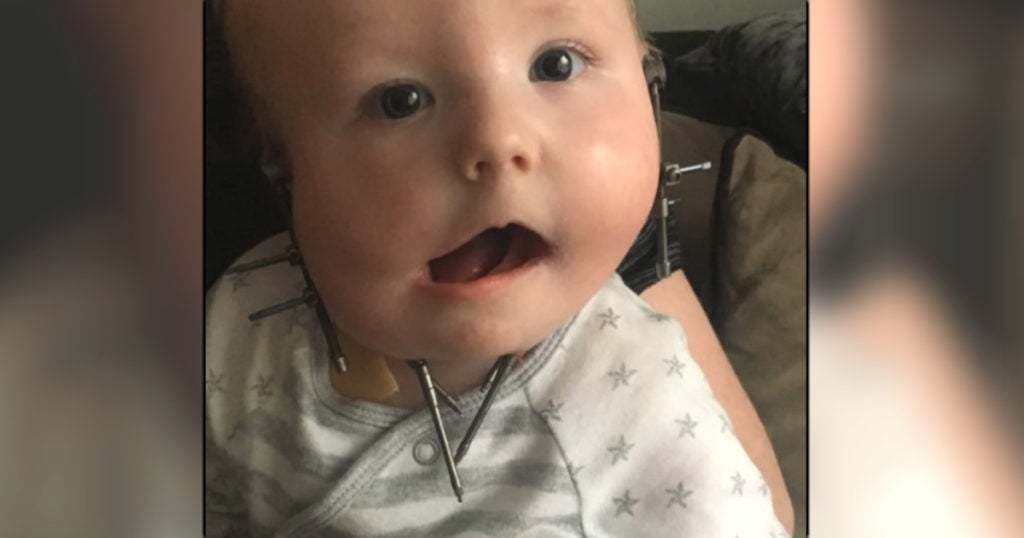 Boy With No Jaw Keeps Fighting

There have been plenty of scares following the initial procedure. One occurred the very next day after his surgery.

"Water from the ventilator went down the tube and blocked his airway. He turned black and had to be resuscitated,” Jade recalled. "They called it a code red. I was screaming. It was so scary."

But this little miracle persisted against all odds.

Kieran and Jade had to learn to turn the screws in Noah’s metalwork, but they’re seeing progress.

“Since his surgery, his jaw has moved forward 4cm which should loosen up his airways,” Jade reports. “The surgery has worked as well as it can do just now and the movement in Noah’s jaw is a big improvement.”

There are more surgeries on the horizon, too. And while you might expect the medical ups and downs to take their toll, miraculously, Noah is nothing but smiles!

Prayers For This Precious Boy

And so, Noah’s family just takes life a day at a time. And their little miracle is inspiring so many people!

"We wanted to tell Noah's story to let people know it is OK to be different,” Jade says.

Despite all the trials, you can just tell Noah is filled with joy. He’s a reminder for how we’re all meant to live our lives — trusting in God and not worrying ourselves over tomorrow. And we just know our Heavenly Father has big plans for this little boy!

“But seek first his kingdom and his righteousness, and all these things will be given to you as well. Therefore do not worry about tomorrow, for tomorrow will worry about itself. Each day has enough trouble of its own.” Matthew 6:33-34

YOU MAY ALSO LIKE: 8-Day-Old Conjoined Twins Are Youngest Ever To Be Separated