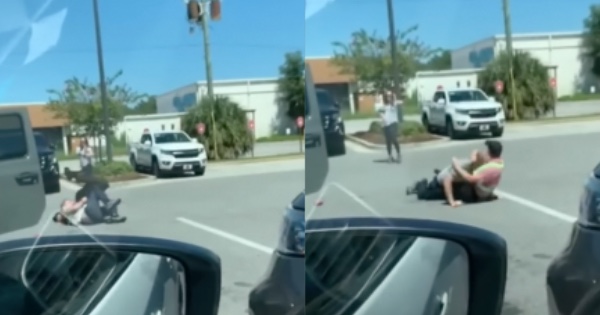 After a 3-month-old baby stopped breathing on a plane, a retired nurse jumped right in to save the day!

RELATED: Little Girl Is Distraught After She Loses Tooth On Plane, Then A Pilot Steps In

Tamara Panzino is retired after being a nurse for 20 years, and her skills were recently needed on a flight that she was on. Shortly after takeoff, she heard the flight attendants asking over the loudspeaker if anyone was a doctor on board.

The reason for this was because a 3-month-old baby named Anjelé had stopped breathing and started to turn blue in the face. The baby's parents were frantic and desperately looking for help.

That's when Tamara jumped right in! The retired nurse started to massage the baby's legs and chest, and very quickly after that, the little baby was breathing again. What a relief!

Baby Stopped Breathing On Plane, Nurse Jumps In To Help

The parents were so thankful to Tamara for saving their little one. “When you have to step forward and do what's right, you do it. It was just a happy story, and it made me feel really good,” shared Tamara.

Ian Cassette, a meteorologist who was also on that same flight, captured a video of the event after the baby started breathing again. The passengers were cheering and flight attendants were smiling as Anjelé's father held her and bounced her.

"On my flight back from Pittsburgh to Orlando, a baby stopped breathing three rows ahead of me," Ian wrote in the caption of his video. "Thankfully a nurse (Tamara Panzino) was able to get the baby to breathe again."

YOU MAY ALSO LIKE: Groom Fighting Stage 4 Cancer Gets Married In Hospital, And Then Doctors Have Amazing News

What a scary moment that must have been for the parents of that little baby. Praise God that He had Tamara in the right place at the right time for her to save the day!