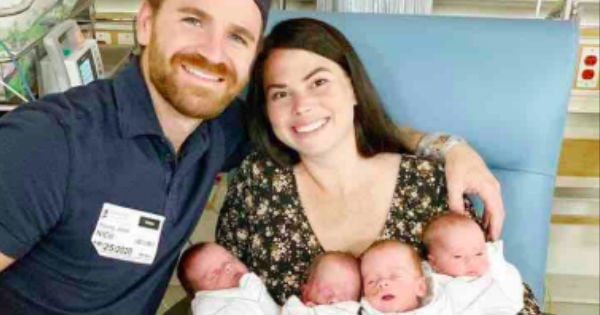 One brave mom underwent a brain tumor surgery while pregnant with quadruplets. She said throughout the whole process, she just had to turn it over to God.

Katie Sturm was three months pregnant when she had a seizure at work. She later found out that she had a glioma, which is a type of tumor in the brain and spinal cord that can be life-threatening. "When I found out I had the brain tumor, it was just kind of so surreal. It was hard to believe," Katie said.

On top of this stressor, Katie was naturally pregnant with quadruplets! According to doctors, quadruplets like hers, which are not identical, occur only once in every 700,000 births.

The doctors wanted to wait until after the babies were born since the tumor appeared to be growing slowly, but plans changed after Katie had another seizure at home in front of her husband.

"We had to basically throw the initial plan out the window," said Katie's husband, Chris Sturm. "When I saw the second one myself, it became a real thing. It was one of those moments where the possibility that something could happen to my wife and my kids is very prevalent and very real."

Mom Had Brain Tumor Surgery While Pregnant With Quadruplets

Katie had her surgery on March 22, which was the day that their city announced a shelter-in-place order. On top of worrying about the surgery, dealing with a pandemic, and being pregnant with quadruplets, the couple was also in the process of finding a new house to fit their growing family!

"This whole year has just been a lot of changes," Chris said. "I don't know how to really describe it other than the giant ball of anxiety."

At 32 weeks, Katie went to the hospital to deliver the quadruplets via C-section. She gave birth to her boys Austin, Daniel, Jacob, and Hudson. The boys spent a few weeks in the NICU but are now home with their family.

YOU MAY ALSO LIKE: Touching Post Announces Gender Of Bindi Irwin Baby And This Little One Is Already So Loved

Despite the challenges that this year brought, the couple is grateful to God to have their babies here with them now and to have Katie's health back.