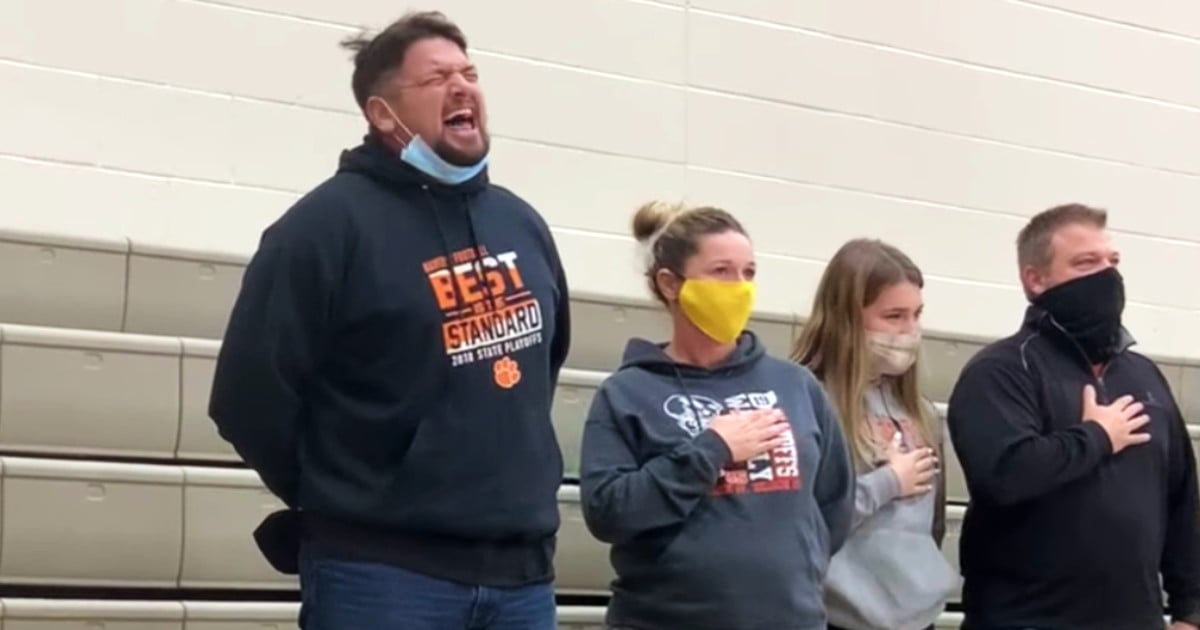 When Gladys Hankerson called the wrong number all the way from Florida, she ended up talking to Mike Moffitt of Rhode Island. But God knew just what He was doing when He connected these two. And more than 20 years later, they are still in touch with such an amazing story behind how their unique friendship came to be!

One day many years ago, Gladys Hankerson picked up the phone to give her sister, who lives in Maryland, a call. But she accidentally called the wrong number, dialing a 401 area code instead of 410.

But what happened next shows how God can use anything for His will!

Special Connection For Woman Who Called The Wrong Number

Mike Moffitt, now 46, was the one who received Gladys’ call. He politely let the sweet lady from Florida know she’d called the wrong number

“I’m so sorry child!” she exclaimed and quickly hung up.

But then, sometime later, Gladys Hankerson misdialed Mike again. It happened several times more, with Gladys profusely apologizing each time for calling the wrong number. Mike, who was in his mid-20s at the time, didn’t mind a bit. And he eventually stopped Gladys from hanging up to ask who she was and where she lived.

"I was like, we might as well get to know each other," Mike explained. "I asked her where she was from, and we just started talking."

The time this young man took out of his day to chat with Gladys meant the world to the woman who was 60 at the time. And she eventually confided in Mike about the struggles she was facing in her personal life.

You see, Gladys’ 30-year-old son had just died. And she was also going through a divorce. And though she’d called the wrong number, the kindness from this absolute stranger was just what she needed.

"During that time I was downhearted, and he felt my sympathy and everything and lifted me up," she explained.

After that, Gladys and Mike no longer chatted simply because Gladys called the wrong number. Now, this sweet woman was calling specifically to chat with her new friend.

It wasn’t just Gladys who felt the special connection. Mike enjoyed the chats, too.

"It just progressed over the years," he said. "Every time you talk to her, you know it's going to be a good conversation. It's kind of like an old-school pen pal."

For Gladys Hankerson, Mike Moffitt was no longer a wrong number. Instead, she began intentionally dialing him every couple of weeks to check in on him. And these two people who started out as absolute strangers, separated by age and many miles, grew to become friends.

"When I'm talking to him, I can feel the love," Gladys explained.

And for Mike, the wrong number put another motherly figure in his life. He pointed out Gladys would sometimes call when Rhode Island got snow.

"She would watch my weather, almost like my mom does," Mike said.

The unlikely friends remained in touch over the years. And so, when Mike and his family decided to take a trip to Florida more than two decades after Gladys first called the wrong number, he had a special stop in mind!

Mike Moffitt and his wife planned a vacation in Florida with their three kids. And since this was where his special friend Glady Hankerson lived, Mike decided to surprise her by showing up on her doorstep!

For over 20 years, the two had only ever spoken on the phone. But Mike realized how special their bond was when one of Gladys’ children called him one day.

"She had her son call at one time to let me know that somebody close to her passed away,” he recalled. “He was like, ‘My mom just wanted me to call and let you know.' All of a sudden [our relationship] became not like a superficial check-in call … I understood what it meant to her."

So, when Mike Moffitt turned up unexpectedly at Gladys Hankerson’s house, it made both of their days!

“Didn’t tell her I was coming and her daughter walked me through the door. I announced, ‘I’m Mike from Rhode Island!’ and the first words out of her mouth were ‘I’m blessed!!'” Mike shared online.

While this friendship originated from what seemed like a mistake, we have no doubt God’s Hand was all over this. He connected Gladys with just the right person for the difficult season she was in — someone she never would have met otherwise.

As Mike points out, “There are incredible people in this World that are a wrong number phone call away!”

YOU MAY ALSO LIKE: Grandma Texts Wrong Person For Thanksgiving In 2016 And Years Later, He Still Shows Up

“For we are his workmanship, created in Christ Jesus for good works, which God prepared before that we would walk in them.” Ephesians 2:10