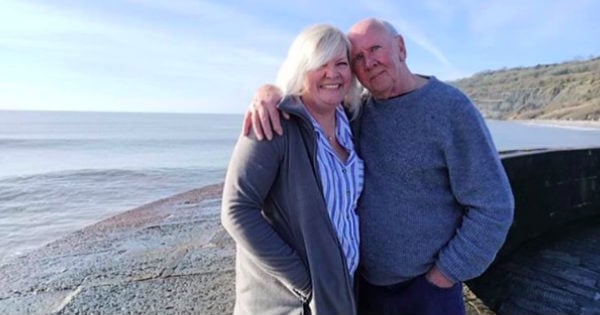 While caring for their dying dog, Maria Henry Gay’s adopted son, Robbie, explained why he wanted to hold the pup as she went to Heaven. And his reason totally wrecked me!

Saying goodbye to a fur-baby is never easy. Our pets are family. And the loss leaves a huge whole in our hearts.

So, it was a tough day for Maria Henry Gay when the vet shared some bad news about her senior dog, Buffy.

Buffy was just supposed to be getting her teeth cleaned and removed. But the vet wanted to run some lab work before putting the senior dog under anesthesia. And sadly, the tests showed Buffy had advanced kidney failure.

The most humane thing in the way of caring for the dying dog was to have her put down. But Maria knew her son, Robbie, needed to be part of the process.

“So I immediately went and picked him up from school,” Maria explained. “On the way there he told me he wanted to be the one to hold her when she went to heaven. And of course, I gave him that honor.”

It’s an emotional time when putting a beloved pet down. While you don’t want them to suffer, you never really want to say goodbye either.

On the way home, Maria told Robbie how proud she was watching him caring for the dying dog. And his response both warms and breaks your heart all at once.

“I know how it feels not to be loved or cared for and I don’t want any animal of mine to ever feel that way,” Robbie told Maria. “It’s only sad for us when they go to heaven. It’s a happy day for them.”

You see, Maria adopted Robbie from the foster system following years of severe abuse and neglect. And his compassionate response while caring for this dying dog just goes to show what a sweet soul he has.

God not only delivered Robbie from his horrible experience, but also used it to bless him with a tender, compassionate heart.

Maria explained how they prefer to adopt senior dogs. Through his adoption story, Robbie is able to relate to them in a special way.

RELATED: Emaciated Pup And Boy with Autism Found Healing Together

Robbie remembers how the longer a child remains in foster care the less likely they are to be adopted.

“If all you guys had wanted was a baby, you would have never gotten me,” Maria says Robbie tells her.

Similarly, it takes a special person to adopt a senior pet. Caring for a dying dog takes an emotional toll, so many people opt for younger dogs.

But Maria says Robbie has reminder her numerous times that how much you love something doesn’t depend upon how long you’ve had it.

“Well you’ve only known me for two years but you love me like it’s been forever,” Maria’s adopted son explained when she asked him what he meant.

You can tell God is at work in this little boy’s heart. He’s been through so much and could easily have a hardened perspective. But instead, he has a wisdom beyond his years paired with a gentle, kind soul.

YOU MAY ALSO LIKE: Young Man's Adoption Story And America's Got Talent Audition

What an inspiration this sweet boy is! And what a powerful reminder of how God can take our worst circumstances and use them to make something beautiful.