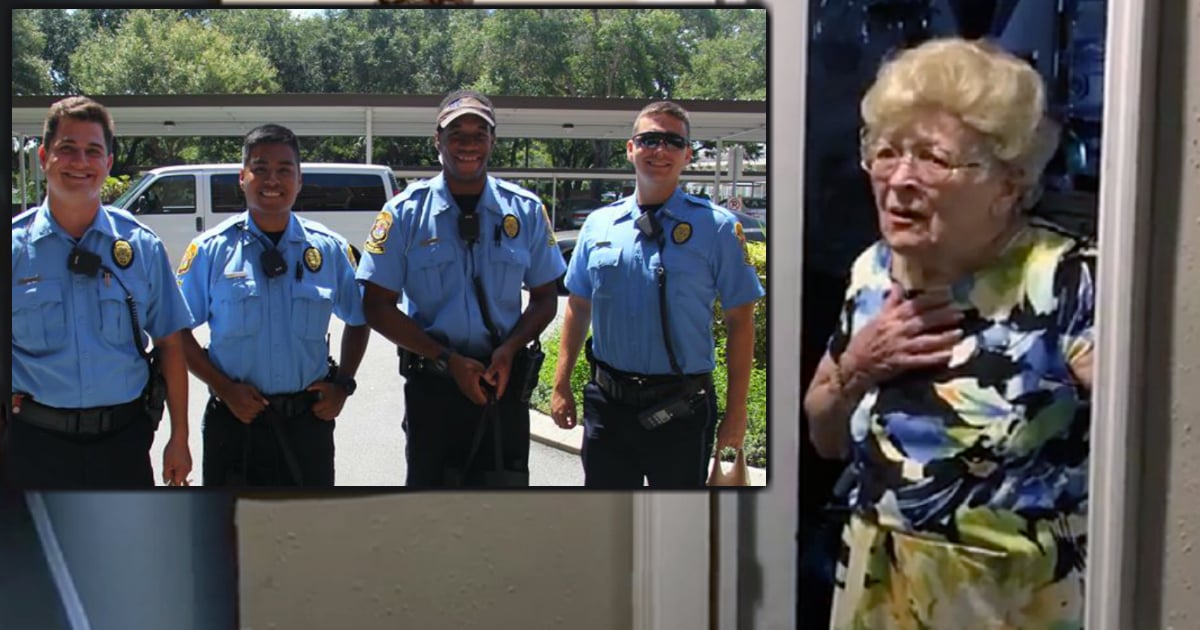 Police Pay A Visit To A 94-Year-Old Grandma, And Her Reaction Is Priceless
Read Article »

Welcoming their baby girl, Claire, was a bittersweet moment for one Indiana couple. While overjoyed at their daughter’s arrival, her birth reminded them of the anguish they’d felt just two years earlier after losing their 14-month-old son. So, they posed for a touching newborn photo honoring their late son, while celebrating the birth of their daughter at the same time.

Gloria and Steve Kimmel were so excited when their son, Isaac, was born. Sadly, though, doctors diagnosed the baby boy with spinal muscular atrophy type 1 (SMA type 1), also known as Werdnig-Hoffmann disease. The disease affects 1 in 10,000 infants worldwide, and a majority do not live past two years of age because of respiratory failure.

RELATED: Grieving Mom Honors The Baby She Lost With A Miscarriage Tattoo

Infants with SMA type 1 experience a host of problems. They have muscle weakness, breathing distress and a weak cry due to loss of lower motor neurons in the spinal cord and brain stem. They also have trouble swallowing and sucking, and never reach the point of being able to sit up or stand by themselves.

Doctors told Gloria and Steve to take Isaac home and love him for as long as they could. And with no other options, it’s exactly what the stunned parents did.

"The helpless feeling that you know your child is on borrowed time and there isn't anything you can do about it is paralyzing," she says. "Every moment becomes so precious, we never took anything for granted, and lived our lives with our baby boy filled with as much love and happiness that we could."

At 14 months old, Isaac’s disease got the better of him. He went home to be with the Lord, leaving his parents to grieve deeply. As a tribute to their baby boy, the two went out and got a single angel's wing tattooed on each of their backs.

"He was half of each of us, so we each had one of his wings to hold us," Gloria explained. "He was the angel that was holding us together when we were so lost without him. The tattoos are a reminder that he is always with us in spirit."

Two years later, little Claire came into the world. And the couple told photographer Megan Miles they wanted to incorporate their angel wing tattoos as a way to create a newborn photo honoring their late son.

"I just thought it would be so wonderful to have our memorial for our son be part of her photo shoot welcoming her into the world, since Isaac couldn't physically be there with us," Gloria says.

Photographer Megan Miles came up with the perfect way to do just that. She laid newborn Claire on her parent’s backs between the two wings.

"When I saw it for the first time, I saw our entire family," Gloria says. "Like Isaac was there with us."

And the heartbreakingly beautiful image became a social media sensation after Gloria’s sister shared the photo on Twitter.

My sister & her husband got tattoos of angel wings after their son died 2 yrs ago. They had a baby girl in June. This moves me to tears. pic.twitter.com/2sVwxkfuBG

The social media attention generated an outpouring of support, with many Twitter users sharing how they too have lost a child to SMA.

And God used the unexpected response to bring comfort and peace to Gloria and Steve.

"The heartfelt compassion of everyone who has heard our story, shared their own stories, offered condolences, and shared in joy of the birth of our daughter is a beautiful reminder of how much good there is in this world," Gloria said.

In our broken world, joy and sadness will always mix together. But we can take comfort in the assurance that a day is coming when there will be no more tears. It’s a day when we will reunite with our Savior, and with the loved ones who left before us. Thanks to Jesus, we can grieve with hope!

YOU MAY ALSO LIKE: Dad Weeps As He Holds His Rainbow Baby For The First Time