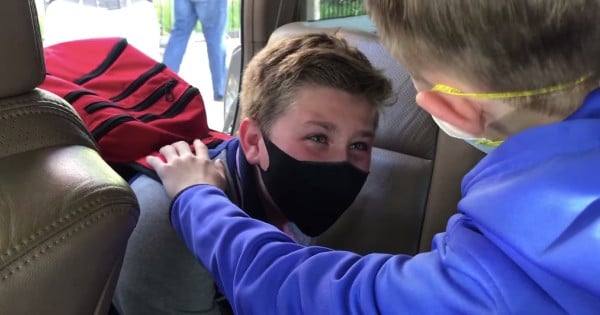 For a Canadian bride and an American groom, getting married at the border was the only way for their family to be at the event. But their love still shined bright, even over border lines!

Karen Mahoney and Brian Ray have a sweet love story. Karen is from Quebec, and Brian grew up in New York, just across the border. They met as kids, and Brian taught Karen how to ski. But 35 years later, their friendship turned into love, and Brian asked Karen to be his wife on the ski slope where they spent their childhood.

Because of the Covid-19 restrictions, no one was allowed to cross the U.S. and Canada border. And Karen, who now lives in New York with Brian, was unable to go visit her family in Canada. On top of that, the couple was having problems planning their wedding, because they didn't know if Karen's family would be able to attend.

"Covid has hit hard. Without being able to hug them for 18 months, it hurts," said Karen.

Brian and Karen also knew they didn't want to delay their wedding too long. They were eager to tie the knot and become husband and wife! "We didn't want to wait and have a long engagement. We are so much in love that we couldn't wait another day to be married," shared Karen. "So, we planned it for September in hopes the border would be open."

Couple Getting Married at the Border So Canadian Grandma Can Attend

Unfortunately, the couple got the news in late August that the U.S.-Canada border was still closed. But one of their friends, who works as a border patrol agent, was able to help them out. The friend ended up securing a special location for the wedding ceremony where Karen's family could attend.

"He was off-duty at the time and let the other agents who were on duty know what was going to transpire," Karen said. "He arranged so that it would be uninterrupted."

The couple stood on the New York side to recite their vow. And on the Canada side, Karen's parents and 96-year-old grandma were able to witness the ceremony. No one was allowed to cross the border, but they were able to hug and be near each other for the special occasion. Karen's grandma was especially thankful to see her granddaughter get married.

"She was extremely excited," said Karen. "I've seen her once in two years. So, it was very emotional. We both cried. And she expressed to me later that to witness the happiest day of my life was, it was a moment she will never forget."

What a sweet story that shows how love can overcome any obstacle!

WATCH: Couple Gets Married At The Border