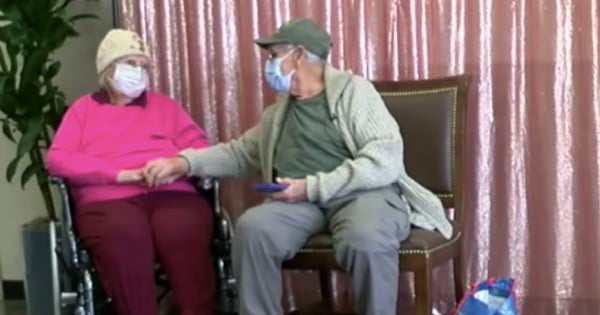 After Spending More Than A Year Apart, This Couple Married 72 Years Is Finally Reunited
Read Article »

Getting pregnant while pregnant is extremely rare but possible. And it’s exactly what happened to Rebecca Roberts, leading to her super twins!

Rebecca Roberts of the UK was 12 weeks into her pregnancy and at her third ultrasound when the technician gave her quite a fright. During the scan, the nurse stared at the screen and went quiet.

“I thought something awful had happened,” Rebecca recalled.

But it was nothing bad, praise God. What the technician saw in the ultrasound was just something surprising because of how rare it is.

It’s an event called superfetation — the phenomenon of a woman getting pregnant while already pregnant. And that’s just what happened to Rebecca Roberts!

“Superfetation is when a second pregnancy implants a few days or weeks after an initial pregnancy occurs. A new egg is fertilized by a new sperm,” maternal fetal medicine specialist Dr. Lisa Thiel explained.

Woman Gets Pregnant While Pregnant

At her third scan, Rebecca found out God had doubly blessed her. Three weeks after conceiving her son, Noah, she conceived a second child, her daughter, Rosalie. She would be giving birth to two babies — super twins!

"I couldn't believe it,” the mom says. “I was shaking so hard they had to lead me down the hall so I wouldn't fall on the floor.”

Getting pregnant while pregnant is extremely rare. The reason is because, once a woman conceives, the body naturally starts making hormonal and physical changes to prevent further conception. So, when superfetation occurs, it is usually within women who’ve had IVF. But that’s not always the case, as with Rebecca and her super twins.

"With a spontaneous pregnancy, it's a little trickier to confirm. But it can happen,” says Dr. Ashley Roman, director of Maternal Fetal Medicine at NYU Langone Health.

Only God knows the reason Rebecca and her partner Rhys were given this special blessing. But it is one they embraced wholeheartedly!

Rebecca Roberts really experienced the impact of this special blessing once she gave birth at 33 weeks to her super twins. She delivered early because Rosalie was no longer growing properly “on the inside.”

Noah weighed 4 pounds, 10 ounces, and Rosalie was even tinier, weighing 2 pounds, 7 ounces. Because of this, doctors placed Rosalie in a special hospital while Noah went into the NICU.

“It broke my heart that they were separated,” Rebecca recalled. “It was horrible.”

Little Rosalie loves defying odds, though, just as she did when appearing after her mom was already pregnant. The tiny girl fought hard and after 95 days, she was strong enough to return to her brother’s side.

"I remember holding both of them at the same time when they were reunited and thinking, ‘This is a milestone in itself,’ ” Rebecca said.

With all the drama behind them, super twins Noah and Rosalie went home and continued to flourish. And by 6 months of age, Rebecca said they were happy, healthy, and inseparable.

“They have such a special bond,” their mom gushed.

Even at such a young age, the babies would hold hands. They’d reach out and caress each other’s faces. And Rebecca has no doubt that getting pregnant while pregnant, rare as it may be, was no accident.

YOU MAY ALSO LIKE: Baby Girl Defies Expectations And Survives To Cuddle Her Twin Brother In Sweet Photo

"Rosalie was meant to be," she said.

WATCH: Couple Talks About Getting Pregnant While Pregnant