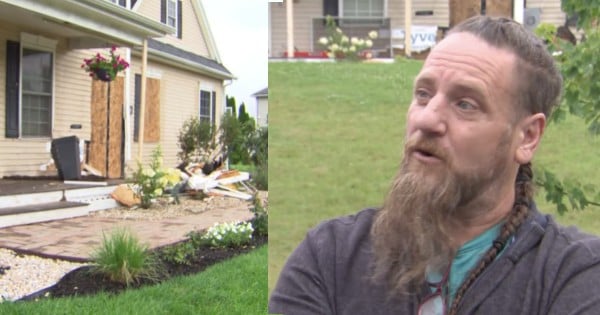 When Prentiss Weatherford witnessed an alleged kidnapping, he jumped in his car and tracked down the suspect, saving a 6-year child. What a hero!

Prentiss Weatherford was outside his home in Louisville, Kentucky when he saw a little 6-year-old on her bike being abducted.

"He just walked up, grabbed her by the collar, picked her up off the bike, and then just tossed her in the passenger seat," says Prentiss when asked how the kidnapper got the little girl into his car.

That's when Prentiss jumped into his own car and chased after the man. And his quick thinking is what saved this little girl's life!

Prentiss got a partial license plate number and noted the type of vehicle, a red Dodge Challenger. He lost the vehicle during the car chase, but he gave the information about the alleged kidnapping to the police. That's when an entire police division joined in and were able to locate the vehicle.

"There was a red Challenger heading away from Dixie Highway," says an officer over the radio scanner.

Ten minutes later, the alleged kidnapping suspect was found and gave up without a struggle. Without Prentiss's quick thinking, this could have turned out a lot differently.

"It was extremely important," a police officer says when asked about Prentiss's help. "The partial plate and the overall description of the car, which was really specific, we were able to find the vehicle because of that."

The officers found the 6-year-old girl safe in the front seat when they opened the Challenger's passenger door. And they were able to deliver her back to the arms of her family. What a relief!

YOU MAY ALSO LIKE: Dad Sets Up Sting To Stop Daughter's Stalker And Hidden Cameras Caught It All

People are now calling Prentiss a hero. "Thank you for the kind words, I really appreciate it," he says when he hears the news. "Just hope you guys would do the same in this situation."