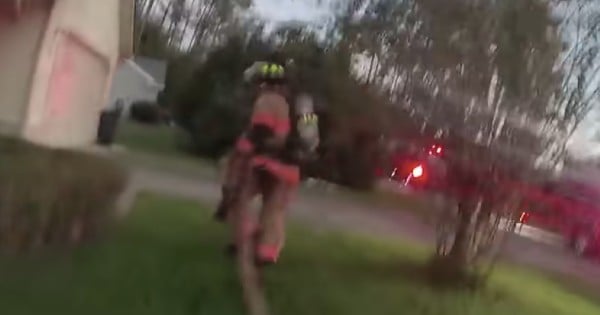 The security camera for a gas station in Yuma, Arizona caught the jaw-dropping moment this marine stopped a robber in just a matter of seconds!

James Kilcer, a veteran Marine, single-handedly disarms a robber at a gas station. Lives were saved, and a robbery was halted because one man was willing to lay down his life.

It was late evening in Yuma, Arizona when James stopped at a gas station to pick up a few items before going home.

As he was chatting with the gas station clerk, three young men entered the store with masks on and one of them had a gun. These young men were expecting an easy robbery to go smoothly where they would leave with money in hand. But they weren't counting on God to place James at the place at the right time.

In a matter of seconds, James single-handedly grabbed the gun that was pointed straight at the clerk. He acted in less than three seconds and the marine stopped the robber.

James Kilcer didn't use brute strength either! He assessed the situation and noted that only one of the three young men had a gun. He also noticed the robber was looking at the clerk and wasn't expecting James to act out or move.

James then reached out and grabbed the gun. He effectively knocked these three robbers off of their game with the element of surprise. James then apprehended one of the robbers until law enforcement arrived on the scene.

When he was questioned about the situation, James said, he wouldn't hesitate to risk his life again. He added, “The Marine Corps taught me not to [mess] around.”

This video is going viral, and it's not surprising why. It deserves to be shared. His incredible act of bravery is refreshing, inspiring, and reminds us all to stand up for justice while we trust in God.

Those who have seen the eight-second surveillance video have commented, "He protected our country, you think he can’t protect a store? GOD BLESS YOU SIR." Another viewer said, "That dude attacked him faster than a snake striking its prey!"

Thank God for men like James. His courageous act reminds us that to be a man of God is to stand up and be counted on when there is danger or other evil. James knew he could trust God for the outcome and this is what makes him a strong, courageous soldier.

May we all rely on and trust God's hand to protect us in any and every situation. Bless this man for his willingness to stand up and protect!

"Praise be to the LORD my Rock, who trains my hands for war, my fingers for battle. He is my loving God and my fortress, my stronghold and my deliverer, my shield, in whom I take refuge, who subdues peoples under me." Psalms 144:1-2