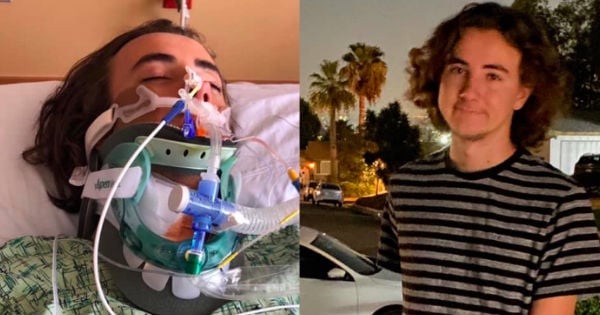 One man starts a non-profit for homeless people after mysteriously meeting two strangers at a bus station.

Anthony Delgado was the man who was confronted by a couple who were complete strangers to him. And after what the strangers shared with him, he thought for only a moment before deciding to run and catch up with them.

But they disappeared. Seemingly into thin air.

RELATED: Man Snaps Photo During Sunrise And Sees A Figure In The Clouds

Back then, years ago, Anthony was both young and homeless. Trapped in such a dire situation, Anthony became addicted to drugs.

"I did a lot of bad things," he shared reflecting on his past.

He spent a considerable amount of time in his addiction, then something strange happened at the Greyhound station in Atlanta. He was given help from two unlikely people. Two complete strangers who approached Anthony out of the blue.

Some would say the help this man received was "divine".

At the station he was approached by two people, a man and a woman. They told him that he didn't look well and should check in to the VA Hospital.

He tried in vain to follow them. In his astonishment that they had disappeared, he started raising a bit of a ruckus trying to find them. This drew the attention of police officers. Anthony apologized for the commotion and told them he was following a man and woman.

To his surprise, the cops said they hadn't seen anyone. Neither had any of the other people who were standing nearby.

Man Starts Non-Profit For Homeless After His Encounter With Angels

Anthony ultimately did find his way to the hospital and into a rehab program. As he recovered he had a conversation with his pastor about the incident leading up to his sobriety.

The pastor responded, "Believe it or not, there are angels."

That was then. Today, Anthony is in charge of a non-profit for the homeless. His organization is called I Care Atlanta, whose purpose is to help the homeless in the community. And if that isn't ironic enough–listen to where his non-profit is located. It is directly across the street from that fateful bus station where two angels changed Anthony's life!

"God has a sense of humor," Anthony said, reflecting on everything.

Now, he is purposed with making the most of that past experience and using it to help others.

"We all need to help each other. We're in a bad state right now. We don't know what's happening one day to the next ... Open your heart. Help your neighbor. Don't be selfish. This me, me, me attitude is not gonna get us anywhere. It's just not."

Leave it to God to turn the life of someone around.

In the Bible, Paul (formerly Saul) was once a persecutor of the church and later became a saint after his encounter with God (Acts 9).

YOU MAY ALSO LIKE: The Powerful Lyrics To ‘Overcomer' By Mandisa Remind Us To Keep Hope In The Lord

Not all of us begin life as Christians. Sometimes we lose our way. But God is ready to welcome us into His arms whenever we are ready to call Him Father, and call His son our Savior. And sometimes He sends angels to help bring us home. That's love.