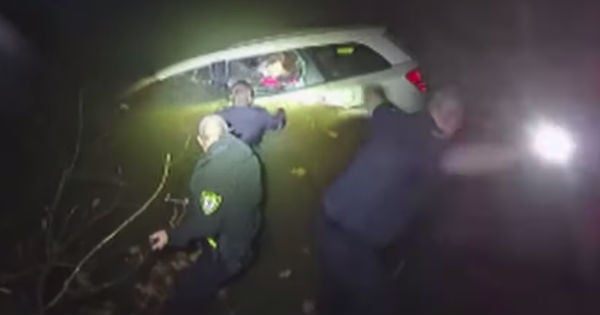 A guardian angel appears during a freak accident, and now he's made a miraculous recovery.

Who's the man with the miraculous recovery? Nathan Wolski was passing the time on a California beach when the unfortunate happened.

Thankfully, a guardian angel appeared in the form of Parisa Voigt.

RELATED: 4-Year-Old Spends 6 Hours Stuck In A Well But His Rescue Is A Miracle

19-year-old Nathan was visiting the San Elijo State Beach in San Diego with his family. He was enjoying his time until he fell into shallow water, his head hitting first. As his head collided with the sand he broke ligaments in his neck and his C5 vertebrae.

“The sand kind of collapsed and my legs just went down with the sand, but my upper body kept going forward,” Nathan shared.

“It just tilted my body, and my head went straight in, and I just hit the sand under the water.”

Unable to move from the injury, he was trapped floating with the water's current. The water dragged him out far, too far for the relatives who accompanied to rescue him.

“I just remember someone flipping me, and then I was just kind of in shock."

That someone was the guardian angel who was saving his life.

Parisa Voigt is a nurse who just happened to be at the beach with her family. Astonishingly, they have moved to Michigan and were simply visiting that day.

“I was watching my son, two of my sons and two nephews. We were the only ones there,” the nurse shared.

When Parisa initially saw Nathan facedown in the water, she thought he was searching for something underwater. Then a relative of his cried in a panic. That's when she stepped into action.

“I just threw my phone out of my pocket and jumped in. I hadn’t swum there before, but I think it must have been shallow enough for me to touch because I just caught him."

The 34-year-old nurse had no issues with saving the college student's life.

“He was moving down pretty fast, down the lagoon, and I caught him by the shoulders and just turned him around. Just like they do in swim lessons with my kids, just to let you get the quickest breath that you could. And he didn’t cough. He didn’t clear his throat. He just took a big breath and said, ‘Thank you.'”

Miraculous Recovery Reunites Man With The Stranger Who Saved Him

Her nurse instincts kicked in as she assisted Nathan.

Pairsa said, “I didn’t know what was going on, but it didn’t seem like he was moving. I thought I could just help him out of the water, that he would be okay."

“I didn’t want to move him too much, I had no idea what was happening.”

After first responders arrived, Nathan was at the start of his miraculous recovery process.

His neck was injured and there were broken bones in his back. He also sustained a collapsed lung and was put on a ventilator. Care for the multiple injuries started really adding up, placing a financial burden on Nathan's family.

Using a GoFundMe, the family has thankfully had some success at raising money to aid in Nathan's recovery.

Thank God, Nathan has since regained his ability to walk. Moreover, he and Parisa were reunited, and he was able to thank her again in person. Their meetup came courtesy of Nathan's mother, Gretchen Wolski.

YOU MAY ALSO LIKE: Police Officers Form Human Chain To Rescue Woman From A Sinking Car

And Nathan's mother had kind words of her own.

“She knows what I call her," she admitted. "She’s Nathan’s angel.”