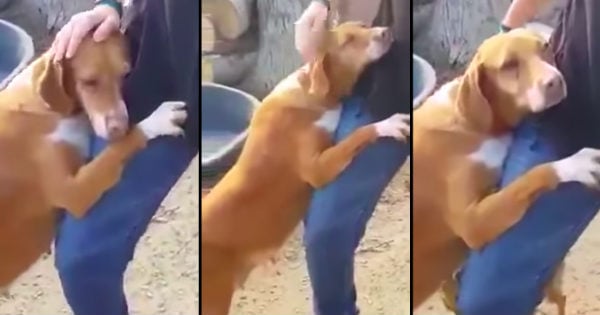 There is nothing quite like the moment when you adopt a new fur-baby family member. It's so exciting bringing them home and introducing him to the rest of the human family. Our pets bring us so much laughter, and living life with them provides so many great memories for the family to share. And in return for the joy they bring, they trust that their humans will love them back and care for their basic needs. Unfortunately in this story, that was sadly not the case for one abandoned dog.

Tintin is a three-legged dog who probably thought that he had found his forever home. He was adopted and had probably settled in and loved his family very much. But the very people he trusted to care for him betrayed him.

RELATED: Dog Rushed Up to Reporter and Wouldn't Stop Hugging Him Until Pup Was Adopted

His own family drove Tintin away from their home, and let him out of the car. And then they drove off.

Kind neighbors later saw poor Tintin wandering and recognized him. So they returned Tintin to his home, not knowing the circumstances that had led him to be so far away from home, to begin with.

A few short hours after the disabled pup returned home, his owners loaded Tintin in the car again. This time, they dumped the three-legged dog out on the street again in a different location.

The first act of cruelty was taped in a gut-wrenching found-footage video. The video showed the heartless act as the owner got out of the car with Tintin and the family's other four-legged dog.

After Tintin was taken out of the car, the other dog jumped back into the car's back seat. The woman shut the car door after her other dog was inside. As the woman started to get back into the car herself, the three-legged dog hopped towards his owner confused. Tintin was then pushed to the ground and left there as his family drove off.

The video was posted on Facebook where it received a lot of attention. 220,000+ views and thousands of comments later, people were outraged and looking for answers. As terrible as this abandonment was, the story does have a happy ending!

YOU MAY ALSO LIKE: One-Eyed Cat Was Going To Be Put Down Until A Special Angel Stepped In

Due to all the local media coverage, happily, Tintin was rescued! In the short time Tintin was staying at the shelter after being found on the street, more than thirty people reached out saying that they wanted to adopt the sweet, three-legged Tintin. He will finally be placed in a happy home with a family that he deserves.