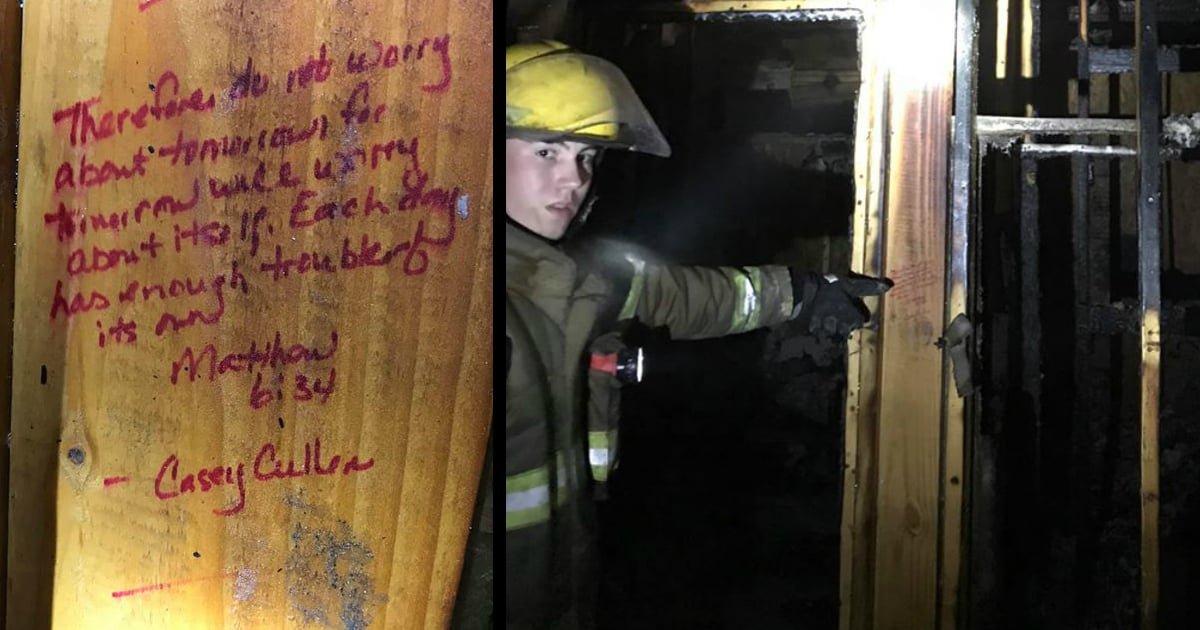 Fire Destroyed House Entirely Except For Where Scripture Is Written, Leaving Firefighters In Awe
Read Article »

After surviving a partial skull removal, Cynthia Martinez is warning others. Since God spared her life, this inspirational overcomer has made it her mission to raise awareness about brain aneurysm and strokes in the hopes of saving other lives!

Cynthia Martinez is a former beauty queen from Delaware. And in 2018, the single mom suffered the unthinkable at just 34 years old!

Cynthia and her son, who was 4 years old at the time, went to a friend’s house for a family game night. But soon after arriving, the mom suddenly collapsed.

“I had bent over to tell my son something when I just fell — in front of my friends and at the feet of my son,” Cynthia says.

Her terrified friends immediately called for help and paramedics raced Cynthia to the hospital.

By the time they arrived, Cynthia Martinez was screaming out in pain from a horrendous headache. Doctors discovered a ruptured brain aneurysm was behind it all.

“Within a few hours I had a craniotomy to clip the aneurysm,” Cynthia explains.

But her battle was far from over. And before everything was said and done, Cynthia Martinez would undergo a partial skull removal!

The single mom seemed to be improving when things took another sudden turn for the worst.

A few days after her initial collapse, Cynthia developed pneumonia, along with lung, kidney, and blood infections. As if that wasn’t bad enough, she also suffered a stroke, which caused her brain to swell.

As a result, doctors had no choice but to perform a partial skull removal — a craniotomy. But there was no guarantee Cynthia would even survive the procedure.

“My family was in absolute shock and disbelief,” she explained. “They [doctors] went from, ‘Oh she’s going to be OK’ to ‘Wait, what are her final wishes?’.”

But miraculously, Cynthia did survive. And while it took a lot of work and quite a bit of time, she even recovered. And the mom has no doubt God is behind it all.

“Miracles and the power of prayer are very real,” she says.

Cynthia says her recovery is because of all of the people she had praying for her.

“I have family in Chile, Argentina, Uruguay that were all praying for me. As well as family friends in Spain, co-workers in the UK, current and old co-workers all over the US that were praying for me,” she says. “And it worked. I’m walking proof that it works; the power of prayer and miracles are very real.”

Recovering from a partial skull removal isn’t exactly a walk in the park. Even after her discharge from the hospital, Cynthia Martinez still had to undergo several surgeries related to an infected bone flap. She had to wear a tissue expander to stretch her skin so doctors could later insert synthetic bone into her skull.

While the journey to recovery was difficult, Cynthia can’t help but recognize just how blessed she is to have survived so much: an aneurysm, stroke, infections, and partial skull removal.

And God is the only explanation. And His gift is something Cynthia Martinez refuses to take for granted.

“Things could have gone very, very wrong. For my family and especially my son – like it does for countless people in my situation,” she says. “When things get tough I try to remind myself that I’m alive and I was given this privilege of living. I struggle because I’m living.”

After enduring more than she ever could have imagined, inspirational overcomer Cynthia Martinez is using her story and partial skull removal to encourage others.

The entire experience helped the single mom realize just how strong she is. And she wants others to realize they, too, can find that kind of inner-strength.

“We are all strong enough, we just don’t know it until we are pushed against the wall and forced to fight,” Cynthia says. “Fight for our lives, fight for our recovery, fight for whatever it is that is important to us.”

She also shares her story to help raise awareness about brain aneurysms and strokes.

And of course, Cynthia other continues to talk about her miraculous recovery to show the power of prayer.

“That’s why I decided to publicly document my journey. I just felt that, so many people all over prayed for me — I owe it to them to show them what they did. What their prayers accomplished,” she says. “I will be forever grateful to everyone.”

What an incredible testimony about our awesome God!