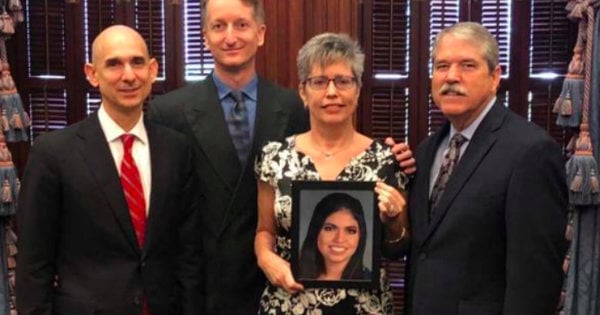 They Couldn’t Help Her Daughter, But Grieving Mom Is Using Tragic Death To Try To Save Others
Read Article »

A complete stranger saves a baby whose nosebleeds revealed a deadly diagnosis!

When our children are sick, we would do anything to make them feel better. This UK couple’s life was turned upside down when their child was diagnosed with a rare disease.

RELATED: Mom Warns Others When Her Toddler Was Nearly Blinded from Popular Bath Toy

Georgie and Andrew noticed that there wasn't something right with their son, Daniel. Daniel had blood in his diapers and frequent nose bleeds.

They went to get him tested and he was diagnosed with Wiskott-Aldrich syndrome when he was just 10-weeks old. This is a disease that causes immune deficiency, and of course, the terrible symptoms he was experiencing. The parents were told that if their baby did not get a stem transplant by the age of two, he would die.

"There were plenty of times we thought he would die. We even had him christened at the hospital because things weren't looking great," said the mother. Georgie then went on to say, "He has the most severe level of the syndrome so we were told from day one we were going to need a transplant to replace his faulty immune system and defective cells and the procedure took place."

When they first hospitalized Daniel at 3-weeks old, the medical staff thought he had leukemia, but after he recovered from sepsis, they discovered it wasn't the case. Sepsis is a disease where the infection the body is fighting off becomes serious and the body starts to shut down. They continued their search for answers.

"The pediatrician looked back at all of Daniel's notes and thought it was Wiskott-Aldrich Syndrome, which I'd never heard of before. And then after the operation to remove the hernia, the hematologist agreed," Georgie stated.

"Within 24 hours of him being tested for this, he was pretty much diagnosed and then doctors were speaking to us about bone marrow transplants. It all went very quickly. Doctors were concerned about a catastrophic bleed that would kill him," Georgie shared.

They waited for 12 long weeks and finally got a match. "We were really fortunate that it was quick before a match was found," said Georgie. "His transplant got delayed three times. The first and the second times were because he wasn't well enough, and the third time was due to the coronavirus."

They continued to search for answers when hope finally came. "It's incredible how an anonymous donor saved Daniel's life. Without that person there would be no Daniel. They are all we needed to give him a second chance at life," the grateful mother said.

Georgie shared that though they're taking it day by day, they're hopeful that within two years, he should be living a more normal life.

His family is now encouraging others to sign up to be a donor. While Daniel was lucky, 4 out of 10 patients normally don't get a match.

We are so glad that Daniel is safe and happy back at home!