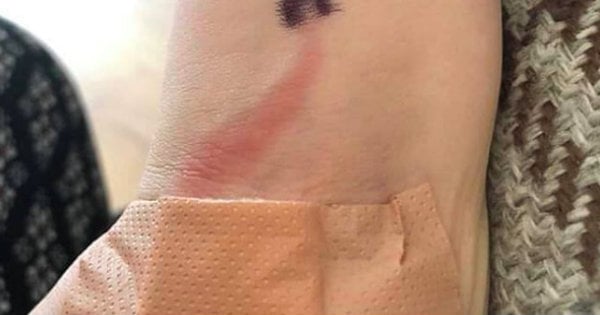 A mom warns others after her toddler was nearly blinded from a popular bath toy!

A Chicago mom has an urgent message for others regarding a bath toy that she says is dangerous. This is a normal toy that is commonly in homes for children's bath times. But her own child was nearly blinded while he was playing with the bath toy.

Eden Strong remembers the incident that hospitalized her son, Baylor. "I just remember praying, ‘Please don't take his eyes. He has such pretty eyes," recalled Eden.

"My 2-year-old son was just having a bath," reported the mom "and what looked like a little bit of irritation from getting water in his eye from the tub toys, then it turned into full blown cellulitis."

His eyes worsened fairly quickly, from a pink color to full blown infection. The progression only took about 12 hours. "His eye was protruding from his face," Eden said. She then added, "It was very obscured. He was running a raging fever."

During Baylor's hospital visit he received a CAT scan as well as antibiotics for his infection. "I came to find out later that because the water is never fully expelled from those types of toys that they can just grow bacteria that you can't stop," Eden said.

A wish from the mother is that the manufacturers that distribute the toys take a closer look at their product. Eden shares her disbelief as she hears from numerous parents that have been through the same thing. "I've been shocked," she commented. "I have a completely full inbox with parents sending me pictures of their children who have gone through the same thing. It really does seem to be a design issue across all manufacturers and not just one specific one, so I really hope even those people will look at this and take that into consideration."

YOU MAY ALSO LIKE: A Note Grandpa Wrote And Put On A Bucket Has Everyone In Tears After Going Viral

Luckily, Baylor has made a full recovery. His mother has obviously removed the offending bath toys, but she worries about the other kids out there whose parents and grandparents don't know about the dangers of the dangerous bacteria-filled water that could be hiding in the bath toys.

Hopefully, by sharing Baylor's story, this information will keep other families safe, and will force the manufacturers to make much-needed design changes for the safety of their product.

WATCH: Mom Warns Others After Her Kid Was Nearly Blinded From Bath Toys