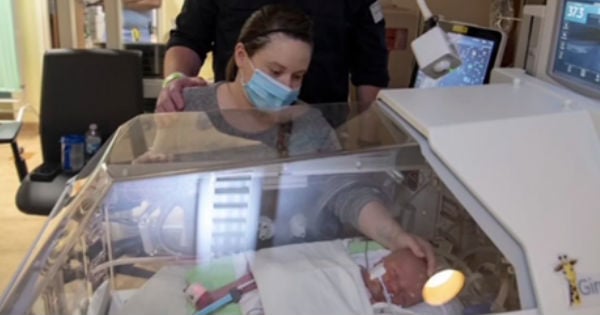 An intense, 24-hour operation separated 9-month-old twins conjoined at the head, Abigail and Micaela Bachinskiy. And while the landmark surgery at first seemed impossible, God had his hand on these two precious girls!

At 11 weeks into her pregnancy, Liliya Miroshnik doctors discovered something very unique about her girls. They were craniopagus twins, meaning their heads were fused together.

“It’s a very, very rare anomaly,” said Dr. Michael Edwards, the lead pediatric neurosurgeon at UC Davis Children's Hospital in Sacramento. “There are very few children born in any one year worldwide that have this anomaly, and of those, there's only a much smaller subset that the anatomy is fortuitous enough to be able to attempt a separation - and hopefully come out with two healthy babies.”

RELATED: 8-Day-Old Conjoined Twins Are Youngest Ever To Be Separated

At first, the news of carrying twins conjoined at the head overwhelmed Liliya, who was already mom to three boys. But her husband, Anatoliy Bachinskiy, helped ease her worried heart.

“It was very tough. I just was shocked. I couldn't process,” Liliya recalled. “When I got home my husband said that everything will be good. We will get through it. This is our kids. We already love them.”

After the initial shock wore off, the couple prepared as much as possible for their daughters’ rare condition. But really, the only option was to trust in the Lord to see them through.

A Plan For Twins Conjoined At The Head

Doctors at UC Davis Children's Hospital spent a lot of time preparing for the arrival of Abigail and Micaela Bachinskiy. They ran many simulations, trying to anticipate any and all possible complications that might arise during their birth.

Finally, the big day came. And the twins conjoined at the head arrived safe and sound!

The girls spent several weeks in the hospital’s Neonatal Intensive Care Unit (NICU) before finally heading home. And as they grew, doctors knew at some point their heads would need to be separated.

“As they get older, there are more risks of shared blood vessels and organs becoming larger or more entwined. The upcoming flu, COVID-19, and RSV season was also a concern,” explained Dr. Granger Wong, the lead plastic surgeon.

By 9 months of age, the medical team was ready to operate on the twins conjoined at the head. They’d spent months using all different forms of technology to map out the procedure.

The landmark surgery took place over a tense 24 hours. And it involved a large team of 30 surgeons, nurses, anesthesiologists, and other key surgical staff working together. And they did so beautifully.

At exactly 3:28 a.m. on Sunday morning, Abigail and Micaela were separated.

“It was like a choreographed ballet,” said Dr. Wong, with Rajvinder Dhamrait, the director of pediatric anesthesiology, adding, “It was flawless, with all contingencies covered.”

The wait must have been excruciating for parents Liliya Miroshnik and Anatoliy Bachinskiy. But they put their faith in the Lord.

At last, they could breathe a sigh of relief. The surgery was complete. Doctors succeeded in safely separating the twins conjoined at the head!

“This is a landmark surgery for us at UC Davis Children's Hospital,” Dr. Michael Edwards said.

And it’s a moment none of those involved in helping these precious girls will ever forget.

“After 10 months of preparation, we were witnessing what we had all envisioned for the girls and we were overcome with emotion and joy,” said Children's Surgery Center nursing lead Aida Benitez. “I will never see 3:28 on a clock again and not think of the moment that Abi and Mica became two separate babies.”

Just like the body of Christ, all of these different doctors and medical staff came together to do something incredible. God’s hand guided them every step of the way. And it’s a blessing for which Liliya Miroshnik and Anatoliy Bachinskiy will forever be grateful.

“Everything went well,” Liliya said. “It felt almost impossible to separate them, but God and the doctors and nurses at UC Davis made it possible. We are so thankful.”

With the surgery behind them, Liliya and Anatoliy are taking their daughters’ recovery one day at a time and trusting the Lord with it.

“It’s all in God’s hands,” Liliya says. “It’s not even in doctor’s hands. That’s what I believe.”

We have no doubt the Lord has big plans for these two little miracles. What a beautiful reminder to trust God in all things!

YOU MAY ALSO LIKE: Prayers Poured In For Desperate Parents And Now Micro-Preemie Baby ‘Fighting Finn' Is Finally Home

WATCH: Twins Conjoined At The Head Separated In Landmark Surgery