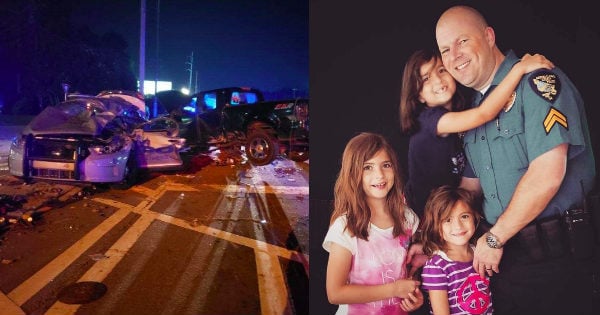 During the protests that took place at the Kentucky Derby, a 5-year-old boy prays for a soldier in the National Guard. And the touching act nearly brings the man to tears.

As crowds gathered for the Kentucky Derby in Louisville, some folks were there to protest the social injustices currently dividing our nation. And so, the city called upon the presence of the National Guard as a precaution.

With tensions running so high, situations like these often result in negative headlines. But God sent a 5-year-old boy that day to do something powerful. And as the boy prays for the soldiers, the inspiring moment was caught on camera!

Kentucky National Guard Specialist Dan Otterson was one of the soldiers tasked with keeping an eye on the protests. And he considers his encounter with this boy and his family as one of the highlights in his military career.

Just after the crowd of protestors passed by, a family approached the National Guard. The mom said her young son wanted to talk with the soldiers.

“Yeah, I would like to pray for you guys,” Dan recalls the 5-year-old boy saying.

RELATED: Police Officer Spotted At School's Flagpole Every Day And Then They Realized He's Praying

Dan got down on his knees, And as the little boy prays over him and his fellow soldiers, the 5-year-old’s powerful words hit him hard.

“I'm sitting there as a grown adult, almost in tears," Dan says of the touching moment.

God’s love just poured out of this innocent child!

With so many differences out there tearing people apart, this moment of unity is just what our world needs to see.

There is so much hurt and anger in our world. But this young man and his family reminded all of the power of prayer.

"You could just see the tenseness from everyone that was there," Dan Otterson said. "So, to see this family in that moment have the individuality, the no crowd mentality, we are here to have unity, to pray to look for strength in the moment. It was just something you can't put into words. I would do it all over again for that moment."

The beautiful moment went viral after someone shared a photo of Dan kneeling as the boy prays over him. And there’s no doubt that sweet boy was put there for a purpose.

"God sent a 5-year old boy to strengthen soldiers,” Dan says, “and that's something you can't ever replicate.”

With so much out there seeking to divide us, let’s all take a page out of this little boy’s book and turn back to the One who unites us!

YOU MAY ALSO LIKE: Police Officer Shares Emotional Testimony After Stranger Covers Her In Prayer At The Gas Station

“Truly, I say to you, If you do not have a change of heart and become like little children, you will not go into the kingdom of heaven.” Matthew 18:3