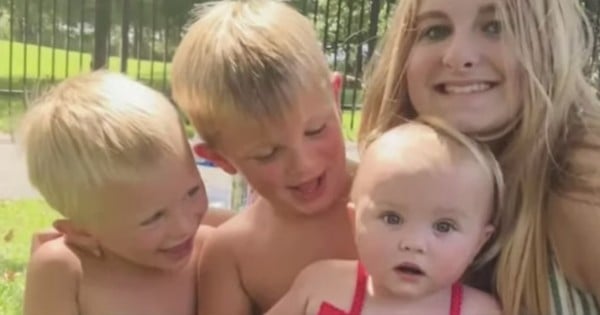 Deputy First Class Marcus Dawson bravely ran into a burning home and saved a 3-year-old boy who was hiding from the flames under a blanket.

Recently, Deputy Marcus Dawson arrived at the scene of a house fire. He talked with a neighbor who mentioned to him that the fire may have started in the kitchen.

RELATED: Frantic Dad Runs Straight Into House Fire When He Realizes His Twins Are In Danger

Deputy Dawson did see that there was a fire on the stove in the kitchen and was spreading to the cabinets.

As the deputy was calling into the house to see if anyone was there, he did not hear any remarks. But once he moved to the back of the house and entered the patio, he saw movement in one of the bedrooms. It was a little boy hiding from the smoke under a blanket.

Deputy Marcus Dawson quickly jumped into action and picked up the child to carry him to safety. Then he handed him to another officer and went back to help at the scene of the fire. Thank goodness he was there to save the toddler from the flames! The little boy then received medical attention and did not have any injuries.

RELATED: Mom Of 6 Feels Like A Failure After House Fire Destroys All But Then Community Shows Up

“Without DFC Dawson immediately running toward danger, even without a safety respirator, this could have been a much different outcome,” said Sheriff Rick Staly. “This child was hiding in fear of the fire and smoke watching a cartoon on his phone when, thankfully, DFC Dawson’s training in emergency response allowed him to find this child and safely rescue him. This was a dangerous situation, and we are very proud of DFC Dawson’s bravery and commitment to serving this community and saving a life.”

All three of the people living in the home got out of the fire without any injuries.

YOU MAY ALSO LIKE: Mom Ran Into Burning House To Save Her 4 Kids And Now Strangers Are Helping Her Recover

God bless Deputy Marcus Dawson and the rest of the Palm Coast Fire Department who helped save this family!