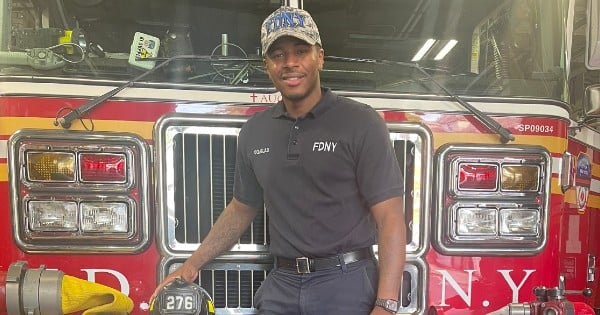 A little boy with autism found in a backyard swimming pool is safe and sound thanks to the heroic actions of the next-door neighbor.

Having a child with special needs presents a whole new set of challenges. Parents often wonder what the world will be like for their children as they grow up. Now, maybe they can rest a little bit easier knowing there are people like the hero from this miraculous rescue who will look out for them.

RELATED: NBA Star Andre Drummond Jumps Into Action The Instant His 2-Year-Old Son Is In Danger

In this dramatic rescue, a surveillance camera captures a hero neighbor rushing to save a drowning four-year-old boy with autism.

Another older boy by the name of Maddox happened to be playing near the pool when he witnessed Alex jump in. Maddox knew that Alex had special needs and he also knew that Alex didn't know how to swim. Maddox raced to tell his father Tom who used to be a lifeguard!

Tom didn't waste one second as he raced as fast as he could and found the little boy with autism in the pool. By that time, Alex had been submerged under the water for more than three minutes.

In one swoop, Tom had Alex on the side of the pool where he began to perform CPR. After three minutes of performing chest compressions and breaths, Alex finally began to breathe on his own.

The mother of the little boy with autism found in the pool tearfully thanked Tom for his heroic actions. She also thanked God that Tom had been there to save Alex and that he knew exactly what he needed to do to save Alex's life.

YOU MAY ALSO LIKE: 2-Year-Old Twins Were Facedown In The Pool And Then 6-year-Old Jumps In

Tom not only had the experience and the knowledge to perform CPR, but he was also in the right time and the right place. Isn't God amazing? God put Tom at the same apartment complex for such a time as this. We're so thankful good souls like Tom lives among us.

Genesis 45:5 "…for God sent me before you to preserve life."

WATCH: Little Boy With Autism Found In Pool And Rescued By Neighbor