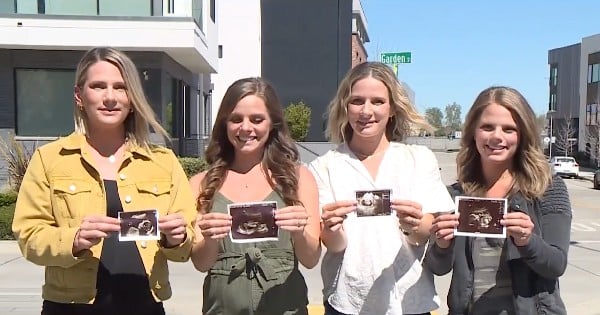 Sisters Make A Joke About Getting Pregnant At The Same Time And Months Later, It Happens
Read Article »

When Louisiana car dealer Alcide Dominique found a homeless man sleeping on his porch, he wanted to help. But in this positive news story, one act of kindness quickly spiraled into a wave of support!

When Alcide Dominique arrived at his car dealership, Dominique Auto Sales, in Louisiana, he found a homeless man sleeping on the porch.

RELATED: Manager Comes Out Of Popeyes Restaurant And Goes Up To Homeless Woman In Parking Lot

The homeless man, Jamie, laid on the hard, wooden porch covered in what appears to be a sheet. He was looking for shelter from the rainy day.

Rather than chase him off, as some business owners may have done, Alcide, who goes by Al, decided to help. And in the process, the Louisiana car dealer got to know more of Jamie’s story.

“He was very kind,” Al explained. “He was just happy to be with people who were … treating him like a human being.”

Jamie used to live with his grandparents, who helped care for him. But after they passed away, the young man found himself on the streets.

Al and one of his employees named Sean treated the young man to a hot meal. They also bought supplies for him at Walmart and paid for him to stay the night at a local motel.

But what the Louisiana car dealer and his employee started, God was faithful in completing!

The two Good Samaritans filmed their experience with James and shared it on social media. And the response was more than they ever expected.

TikTok do your thing! Let's help him out. Everything sent to me will go directly to him.

Strangers from all over started reaching out to the Louisiana car dealer asking for ways to help Jamie. Donations rolled in so he could stay in the motel rather than wind up back on the streets.

“In one night, I think we got maybe about two to three thousand [dollars],” Al explained. “It was like a blessing. … He didn’t have to go back on the street.”

RELATED: He Was Homeless, Hungry, And Unemployed Until God Used Strangers To Bless Him

Additionally, people have sent clothes, basic supplies, and Bibles. All of it going to the car dealership so Al and the others can help Jamie get back on his feet.

“It would be a tragedy for him to end up being on the streets again a year from now,” Al said. “So our goal is to work with him and take the time that we need to find him some rent-reduced apartments, perhaps a part-time job, transportation [like] a bicycle or a car.”

Al says the generosity of so many strangers has “amazed” and “inspired” him. And though so many are crediting the Louisiana car dealer for changing this homeless man’s life, Al is quick to correct them.

Al and his coworkers could have easily ignored or even run off the homeless man sleeping on the porch. Or, after treating him to a meal and a night at the motel, they could have considered their part “done.”

Yet, as donations and support pour in, they are answering God’s calling. They are investing their time and efforts into truly helping Jamie get the second chance he deserves.

It’s beautiful to see so many people coming together to be the hands and feet of Christ.

And it’s a wonderful example of how sometimes, all it takes is one small act of kindness to inspire others to get involved, too. May this positive news story remind you of the power God has given each of us to make a difference in the world!

“For truly I say to you, If you have faith as a grain of mustard seed, you will say to this mountain, ‘Be moved from this place to that;’ and it will be moved; and nothing will be impossible to you.” Matthew 17:20