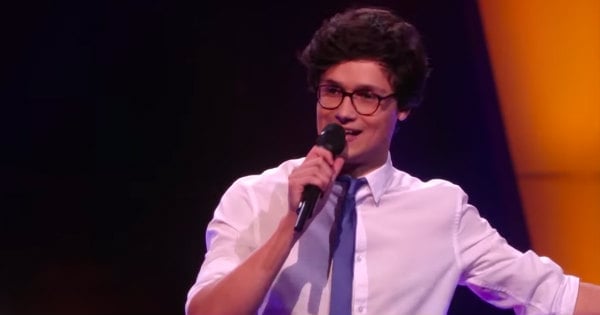 How Much Dennis van Aarssen, Young Contestant on the Voice, Sounds Like Frank Sinatra Is Crazy
Read Article »

This Michael Buble ‘Always On My Mind’ performance is such a smooth take on the tender Willie Nelson classic. Put this one on repeat, please!

Michael Buble is the first name that comes to mind when you think of jazz music of this generation. The 41-year old singer-songwriter has released over 55 million albums worldwide since 2001 with his first album. His music is influenced by classic singers like Frank Sinatra, and he's covered various jazz and swing classics that have touched the hearts of everyone over the years.

But what Michael did for his Call Me Irresponsible album, was quite unexpected. He decided to croon a classic country hit from legend Willie Nelson.

He sat solo on the center stage and threw a country cover into the mix during an AOL Music Sessions performance. And the Michael Buble ‘Always On My Mind’ performance was incredible.

“Maybe I didn’t love you

Quite as often as I could have

And maybe I didn’t treat you

Quite as good as I should have

If I made you feel second best

Girl I’m sorry I was blind

You were always on my mind

You were always on my mind”

His velvet voice spellbindingly turned the country song into a classy jazz tune. His voice thoroughly hints of heartbreak like a lone coyote crooning of what was. You might as well go outside and howl at the moon with him.

With Michael's band backing him with soft accompaniment to his velvety voice, Michael glided through the words in the same subdued way he sings the rest of his songs.

Decades ago, songwriters Johnny Christopher, Mark James, and Wayne Carson penned the song. Wayne Carson shared that they knew they had something special right away. "In this case, ‘Always On My Mind' happens to be one of those things that, universally, everybody on the planet has been there, you know. And it struck all at one time. Everybody touched base with that one. It was just magic that it was so simple and so right on the button."

Singer Gwen McCrae and Brenda Lee both recorded the song in 1972. That same year, Elvis Presley also released his own version. But it was Willie Nelson who made the song legendary. It seems Michael Buble will be joining great company with this fantastic version of ‘Always On My Mind’.