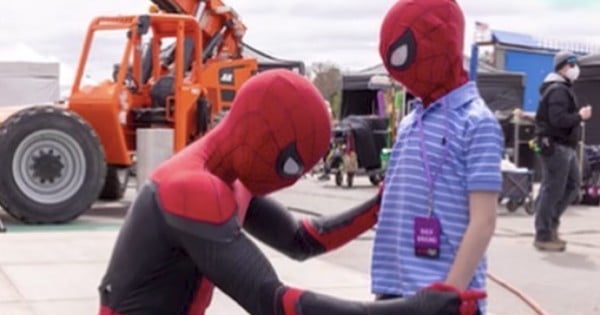 When a stranger at a hockey game spotted a mole on the back of the neck of Red Hamilton, she passed a note urging him to see a doctor. And thank God he listened!

Brian "Red" Hamilton works as the Assistant Equipment Manager for the Vancouver Canucks of the National Hockey League. And one night, as Red was doing his job during a game, God put the right person in his path to deliver a very important message!

Hockey Fan Calls Out Mole On Back Of Neck

Nadia Popovici sat in the stands watching her favorite NHL team, the Seattle Kraken, play their first home game in Seattle, Washington, against the Canucks. Her seat gave her a perfect view of the back of the Canucks bench. And even though most of the attention is on the hockey players during a game, something about Red Hamilton jumped out at Nadia.

Nadia is preparing to go to medical school next year. And as a result, the 22-year-old has done a lot of volunteer work in hospitals. So, as Red bustled about moving equipment, Nadia noticed what many others would have likely overlooked — a mole on the back of Red’s neck.

Nadia recognized some signs indicating this mole could possibly be cancerous. And even though Red Hamilton was a complete stranger, she felt compelled to alert him to this possible danger.

“It can’t hurt just to say something,” she thought to herself.

But how? It wasn’t like Nadia could just walk up to Red in the player’s area or yell to him through all the noise of the game. So, the quick-thinking hockey fan came up with a clever idea.

Life-Saving Note From A Stranger

Nadia opened the Notes app on her phone and hastily typed in a message for Red. She banged on the sheet of plexiglass separating her from Red and held up her phone so he could see her note. It read:

“The mole on the back of your neck is possibly cancerous. Please go see a doctor!”

The note initially caught Red Hamilton off guard. He simply shrugged and went back to work. But later, he had the team doctors take a look. And when they, too, thought the mole looked suspicious, Red went in for a biopsy. And it’s a good thing he did!

RELATED: Woman Taken Aback As Strangers Call Out A Big Lump On Her Neck But It Ends Up Saving Her Life

It turns out the mole on the back of Red’s neck was malignant melanoma. And had it gone untreated, doctors said it would have become life-threatening in a few years.

The reality of what could have happened had Nadia Popovici, a complete stranger, not spoken up hit Red hard.

A complete stranger saved his life. And Red Hamilton desperately wanted the chance to thank her. So, he turned to social media, sharing the incredible story and asking for help in locating his special angel.

RELATED: 22-Year-Old Gets Messages On TikTok About A Bump On His Neck And It Turns Out They're Right

The post about the mole on the back of Red’s neck circulated online and quickly identified Nadia Popovici as the stranger who went above and beyond. And the two of them got to meet face-to-face at another hockey game between the Kraken and Canucks.

"I got to look him in the eye and hear what happened from his perspective," Nadia said. “So the fact that I got to see him and talk to his family members that have been really impacted by him dodging a big bullet that's so special.”

But Red Hamilton had a big surprise in store for Nadia Popovici. During one of the breaks in the game, Red honored Nadia in front of the crowd and awarded her with a $10,000 scholarship for medical school funded by the two opposing NHL teams.

Nadia could have easily let fear hold her back from trying to help Red. She could have made a thousand excuses for why she shouldn’t say anything.

But instead, she followed God’s prompting and saved a life. What an inspiration for us all!

WATCH: Hockey Fan Spots Cancerous Mole On Back Of Neck