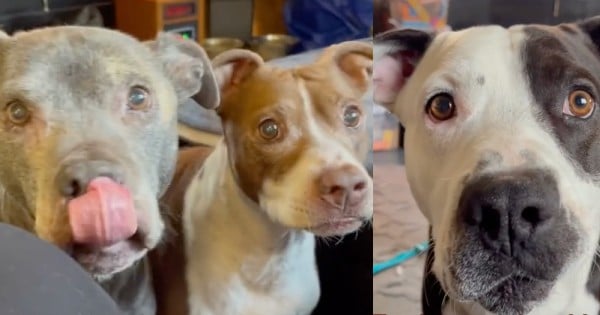 Pup Nearly ‘Died from Broken Heart,’ Then Gets The Sweetest Surprise
Read Article »

A family of mystery creatures were found in a dog bed at a woman's house in Australia, and their cute little faces are sure to make you smile.

RELATED: Woman Rescues Scared Creature with No Idea What It Is and Mystery Animal Stumps Vets, Too

Emma Jane Kidd has a dog named Merlin, and she recently noticed something peculiar in Merlin's bed. What she saw was a family of quendas! These animals are also known as southern brown bandicoots, a marsupial native to southwestern and southern Australia.

The three little quendas were left by the mother quenda during a stormy night, and the one-month-old babies were snuggled together in the warm dog bed.

Emma quickly saw that the baby quendas were frightened, so she called a local wildlife shelter. The shelter came to rescue the animals and said that it was strange the quendas were found inside a home.

"Quendas commonly live in yards and local bushlands," a representative from Darling Range Wildlife Shelter said. "It’s not unusual to see them if you live in the hills. But these quendas making a nest in a dog’s bed on the house veranda is very unusual."

The shelter then posted about the little creatures on their Facebook page.

“They aren’t dogs! Found snuggled up in a dog bed, these native babies and their mum had been hiding from the storm. The dog owner of said bed however wasn’t open to sharing their bed with quendas, and the startled quenda mum shot off, leaving her “golden stage” triplets in the bed," the post read. "The triplets are now in care with us and are expected to grow nice and healthy. When they are big and independent, we will release them back home."

YOU MAY ALSO LIKE: Young Man Found A Baby In The Trash And Took A ‘Leap Of Faith' In Deciding To Raise Him At 22

God bless these type of shelters that help protect animals and give them the kind of care that they need and deserve!