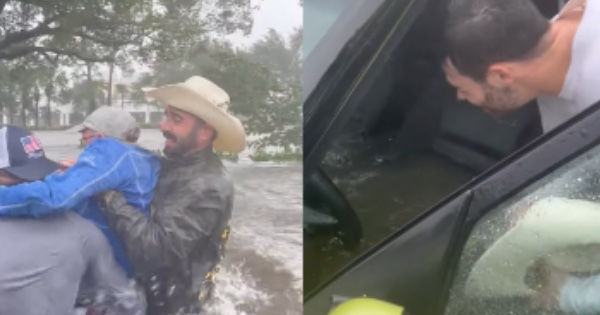 While heading home one day, 9-months pregnant firefighter Megan Warfield became the passenger in a multi-car collision. And this heroic mom wasted no time jumping into action, helping another crash victim before going into labor herself!

Megan Warfield was not on duty when the crash occurred. But that didn’t stop her from doing what came naturally — helping others.

After ensuring that she and her mother (who had been driving) were ok, the pregnant firefighter hopped out of the car to assess the situation. She first began directing traffic around the crash scene until she noticed someone who needed help.

Megan spotted a woman trapped in an overturned vehicle. And she knew she couldn’t just stand there and wait for help to arrive. Megan knew she was 9-months pregnant, but she was also a firefighter. And that meant she possessed the skills for a situation just like this!

Megan Warfield raced over to the woman trapped inside the flipped car. And she immediately started doing what came naturally to her — trying to save the woman.

At first, the pregnant firefighter began trying to crawl into the vehicle. But then she remembered that while she desperately wanted to help the woman inside, she had to protect her unborn baby as well.

“I started to climb in there with her, but then I was like, ‘What are you doing? You're nine months pregnant,'” Megan recalled. “I ended up holding onto her to keep her in place because I wasn't sure of her injuries at the time.”

Since Megan couldn’t pull the crash victim out, she did the next best thing. She comforted and calmed her while they waited for help to arrive.

“It was also important that I keep her calm,” she said. “It was a pretty traumatic event.”

As emergency responders arrived on the scene (which included her partner, Joshua Daugherty, who is a paramedic), Megan became aware something wasn’t quite right with her. Beyond the stress and emotions of the incident, the pregnant firefighter realized she was having labor contractions!

“I don't know how I did what I did because the cramping was so bad,” she said. “I must've just been running on adrenaline.”

First responders transported Megan to the hospital where she welcomed her little blessing, Charlotte, into the world!

Dedication To Serving Others

Many have praised the pregnant first responder for her heroic actions, including The Bowleys Quarters Volunteer Fire and Rescue Department who called Megan Warfield a “true public servant.”

As for Megan, she humbly brushes off the accolades, saying, “It's what I was meant to do.”

Little Charlotte is so blessed to have such a wonderful, courageous mother. The baby girl joined the family, which includes her siblings, Ellie (6) and Jameson (5).

“As each has received a gift, employ it in serving one another, as good managers of the grace of God in its various forms.” 1 Peter 4:10