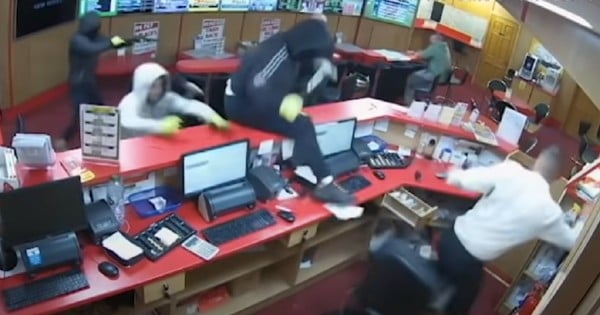 Suspicions arose after two sanitation workers noticed a car parked in an unusual location while they were on their typical trash route. And when they realized the car matched the description of one mentioned in a recent amber alert, they sprung into action!

Sanitation workers, Dion Merrick and Brandon Antoine, noticed a silver Nissan sedan parked in a field along their trash route. When they made the connection it was involved in an ongoing amber alert, Dion told reporters it "hit him like a ton of bricks."

The two men quickly took action, first calling the local police to report the car. The crime-fighting duo then hopped back in their trash truck and moved it to the field's entrance, trapping the kidnapper in the field.

Upon seeing the two sanitation workers, the kidnapper panicked and tried to make an escape. Only to wind up getting his car stuck in the brush and mud. Before the kidnapper could get free, however, police arrived. And Dion and Brandon watched on from the road as the suspect was taken into custody. Then ten-year-old Jalissa Lassalle emerged from the car and was taken to safety!

After his little girl was returned home safely, Jalissa's father, Jermaine, was immensely grateful. Grateful for the bravery of Dion and Brandon's actions that day. "I just can't thank them enough," Jermaine told reporters. "I'm glad they took the time to get her back home."

Because of the bravery and action these two men took on that day, a scared little girl got to come home safely and live to see another day. And a panicked father can finally rest easy knowing his little girl is safe. As for Dion and Brandon, they will live on as heroes, knowing they did the right thing that day.

“Learn to do good; seek justice, correct oppression; bring justice to the fatherless, plead the widow’s cause” Isaiah 1:17

WATCH: 2 Sanitation Workers Notice Something’s Not right And Save A 10-Year-Old Girl