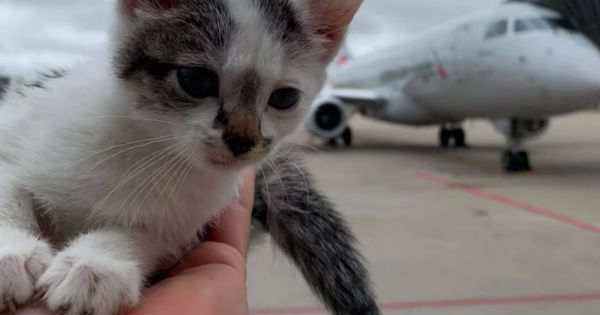 Lost items can turn up in the unlikeliest of places. Looks like animals can too. In the UK, a security guard discovers a ‘stray' cat missing for two years and helps return her.

At five years of age, and completely black in color (minus the greenish-yellow eyes,) Ruby, went missing two years ago from her home in Bedfordshire, England. She ran away and was declared missing ever since.

RELATED: Workers Discover A Tiny Kitten On An Airport Ramp And Whisk It To Safety

Ruby's home was situated near a frequently used truck stop. This reality made her owner think Ruby had somehow stowed away on a truck.

Whatever the case, owner Jordan would later discover Ruby was found about 60-miles away from her home.

That place was Coventry, England. Here a security guard was feeding the seemingly stray cat for three weeks and eventually decided to have someone from a cat welfare charity called Cats Protection take a look at her. A volunteer from the organization checked the cat's microchip and discovered where she was from. She was indeed not a stray.

Wendy Harris, a volunteer from the organization shared they were not initially able to make contact with the owner because they had no phone number. So she tried a different approach.

"I sent an email to the listed email address asking the owner to contact me…We also advertised her on our lost and found Facebook page. After a couple of days, I sent a letter to the postal address."

"Her owner rang me as a result of the letter and at first thought it was a hoax, as she had been missing since April 2018…He said he would drive straight here," she said.

Once Ruby laid eyes on her owner, they picked up right where they left off.

YOU MAY ALSO LIKE: Alex Trebek Dies At Age 80 After A Brave Battle With Pancreatic Cancer

Jordan stated, "No words can describe the happiness I'm feeling right now. I had little hope of finding her after nearly three years, but now she's home safe and sound."