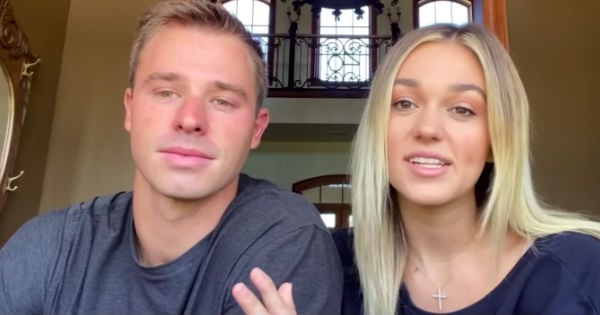 When Sadie Robertson’s Pregnancy Test Came Back, She Hit Her Knees And Cried Out To God
Read Article »

After battling stage 4 pancreatic cancer for more than a year, Alex Trebek dies at age 80. The heartbreaking update left the Jeopardy host’s fans reeling. But there is also comfort in knowing Alex’s worldly suffering is over and he’s now in the presence of his loving Lord and Savior.

Alex Trebek is probably one of the most recognizable faces and names out there. That’s because he’s been hosting the popular game show, Jeopardy, since 1984.

God blessed Alex with a TV career spanning more than 30 years, earning him a place in the Guinness Book of World Records for “most game show episodes hosted by the same presenter.” In fact, Alex Trebek actively worked as the Jeopardy host right up until his death.

We all knew Alex was battling cancer. But with his consistent presence on our TVs at home, hearing that Alex Trebek died still hit like a ton of bricks.

The shocking revelation of Alex Trebek’s stage 4 pancreatic cancer diagnosis came in March of 2019. He bravely announced his plans to rely on his faith throughout the battle. And the host’s candor and confidence in the face of grim odds were an inspiration to all.

Alex remained stoic throughout the “crippling pain” caused by the illness, as well as the cancer treatments. And for a time, he made great strides. At one point, Alex Trebek was in remission.

Sadly, though, in September of 2019, an update from Alex Trebek revealed he was headed back into chemo treatment.

During all of this, the beloved game show host remained honest about his journey. He shared openly about both the good days and the bad. Alex Trebek faced the reality that he might die without fear. And through it all, he never stopped fighting.

He also never stopped working. Many in Alex’s position would have retired from TV. But for Alex Trebek, showing up to host Jeopardy helped keep him going.

But though he continued to fight and receive treatments, Alex Trebek’s health declined.

Alex remained candid. And as his condition worsened, he even admitted there were times he felt like he just wanted to die. But in moments like those, Alex Trebek had his wife, Jean, cheering him on.

RELATED: Alex Trebek Interview Recounts Day He Told Wife ‘I Want to Die' But Her Goodness Keeps Him Fighting

With such an incredible support system and such strong faith, Alex Trebek refused to give up, even on the darkest days.

“It would have certainly been a betrayal of my faith in God and the millions of prayers that have been said on my behalf,” he said.

Before Alex Trebek died, he spent his final days showing up on the set of Jeopardy. He kept fliming through October 29, 2020. Then, the news broke on Sunday, November 8, 2020, that the Jeopardy host had gone home to be with the Lord.

Jeopardy! is saddened to share that Alex Trebek passed away peacefully at home early this morning, surrounded by family and friends. Thank you, Alex. pic.twitter.com/Yk2a90CHIM

Surrounded by loved ones, Alex Trebek’s battle here on earth ended and he found healing in Heaven.

The news of Alex Trebek’s death had fans and celebrities sharing their heartache on social media.

An inspiring, strong, distinguished legend of a man.
What is Alex Trebek? #RIP pic.twitter.com/bzumNChYWq

Suzanne Somers lauded him as “a wonderful man and wonderful friend”, expressing her condolences to Alex Trebek’s wife and children

Alex Trebek, a wonderful man and a wonderful friend. My husband @therealalanhamel and Alex go back decades to their early years in television in Canada. We had the pleasure of being friends. My deepest sympathy to Jean Trebek, Alex's beautiful wife, and their children.

American Idol‘s Ryan Seacrest summed up how most fans feel, saying, “Alex Trebek was like a family member who I watched every night.”

Alex Trebek was like a family member who I watched every night. I remember going to the set to watch him tape a show before I started my TV career. He was a big influence and one of a kind. Rest In Peace, Alex. https://t.co/B9wq95uRg4

The posts commiserating the loss of Alex Trebek continued pouring in. But an especially touching tribute came from a recent Jeopardy champion, Burt Thakur.

In an episode taped in August but airing on November 5, just days before Alex’s death, Burt Thakur took a moment to share with the host the huge impact he’d had in his life.

Alex’s impact is immeasurable. Thank you for sharing, Burt! pic.twitter.com/XgGGwJ8GlH

Emotion overwhelmed Burt, who’s family came to America as immigrants, as he recalled learning English by sitting in his grandfather’s lap every day and watching Alex Trebek on Jeopardy.

“My grandfather would always look at Alex and say, ‘That’s a good man and one day you’re going to meet him and shake his hand’,” Burt Thakur explained.

Burt wiped away tears as he got the opportunity to thank Alex in person. And after Alex Trebek’s death, he recalls just how powerful the moment was.

“First of all, to walk up on that stage like I saw as a little kid. He comes out and is an absolute gentleman and professional. He was so witty and funny,” the Jeopardy champion said. “Alex Trebek is a significant reason why I am the way I am.”

During the taping of the show, Burt Thakur says there were times Alex Trebek was clearly ill. But the brave host inspired him as he just “kept on keeping on.”

“As opposed to bowing his head and wincing, he kept on keeping on. It was this mentality that this is something bigger than myself. This is something that matters,” Burt recalled. “To not lose his cool and have a defeated attitude, cloaked with a mantle of humility… It’s something we can all learn from.”

Other Reactions From Jeopardy Champions After Alex Trebek Dies

Lots of other past Jeopardy contestants also flooded social media

I took the Jeopardy! test when I did because I wanted to get on while it was still hosted by Alex Trebek, one of my all-time heroes. He did not disappoint. pic.twitter.com/6BtYgSe9B2

It seems silly to say that one of my proudest accomplishments was winning a game show. But “Jeopardy!” wasn’t just any game show, and Alex Trebek wasn’t just any host. So happy I got to meet one of my childhood heroes and can’t quite believe he’s gone. RIP. pic.twitter.com/TuqsrFjfhR

Now that he can’t get in trouble:
This picture was taken after I lost the Final, finishing the best two days of my life. My mom knew that the posed contestant photos would take too long.
For me, Alex Trebek made being loudly smart something to be proud of. pic.twitter.com/rPq9DnbaHD

It was one of the great privileges of my life to spend time with this courageous man while he fought the battle of his life. You will never be replaced in our hearts, Alex. https://t.co/LLoUASRMa9

But after Alex Trebek died, it was Burt Thakur who gave some of the best advice for how we can all honor the late Jeopardy host. Burt suggests we try exhibiting some of the same kindness and grace for which Alex was known.

“My wish is for people to honor him by letting go of hate in their heart today,” he said. “If they have someone who matters to them, let them know.”

Alex Trebek had a quiet faith that showed in how he treated people. What a beautiful legacy to leave behind.

We mourn the great man this world lost and our hearts and prayers go out to Alex Trebek’s family. But what comfort there is in knowing Alex is now free from all pain and suffering and that he is basking in the glory of the Lord’s house forever!

YOU MAY ALSO LIKE: Beloved Jeopardy Host Alex Trebek And Wife Jean Donate $500,000 To Help The Homeless

“For I am now ready to be offered, and the time of my departure is at hand. I have fought a good fight, I have finished my course, I have kept the faith: Henceforth there is laid up for me a crown of righteousness, which the Lord, the righteous Judge, will give me at that day: and not to me only, but to all them also that love His appearing.” 2 Timothy 4:6-8