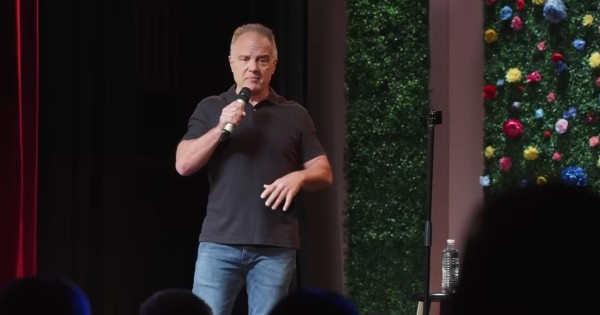 For sports reporter Mark Woodley, weather reports are not his usual job. So, when he was tasked with covering a blizzard, his brutally honest made for some good laughs!

Winter can be a dangerous and hazardous time of year. Snow and ice can make travel hazardous, resulting in crashes, injuries, and in some cases, even death. Apparently, wintry weather can also lead to sports reporters being a tad bit cranky.

RELATED: Boy Shoveling Snow In Toronto Goes Viral When His Exhausted Reaction Has Everyone Rolling

Mark Woodley, a sports anchor/reporter for KWWL in Waterloo, Iowa, was asked to do something outside the normal duties of his job: go outside and cover wintry weather. To say he was honest in his reporting would be a massive understatement.

Mark gave very frank and blunt remarks during his live hits when the anchor sitting behind a desk in a heated studio would ask him about conditions outside.

The hilarious clip begins with an anchor asking "Mark, how you feeling out there?"

Mark, who is clearly perturbed about his assignment, responds with an openness not normally seen from a television reporter.

"Again, the same way I felt about 8 minutes ago when you asked me that same question," he said.

Some other absolutely hilarious and candid comments from Mark Woodley’s weather reports include:

"I normally do sports. Everything is canceled here for the next couple of days so what better time to ask the sports guy to come in about 5 hours normally, earlier than he would normally wake up. Go stand out in the wind and the snow and the cold and tell other people not to do the same thing," he said.

Mark does not attempt to hide his disgust at being forced to cover the weather outside.

At the clip's 45-second mark, Mark says, "It's absolutely fantastic, Ryan. I'm used to these evening shows that are only 30 minutes long and generally on those shows, I'm inside. So, this is a really long show. Tune in for the next couple hours to watch me progressively get crankier and crankier."

Toward the end of the clip, Mark Woodley flat-out asks if he can go back to his regular duties and leave the weather reporting to the others.

The clip concludes with Mark signing off by saying, "Live in Waterloo, for the last time this morning, thankfully, I'm Mark Woodley, News 7 KWWL."

YOU MAY ALSO LIKE: News Anchor Is Completely Caught Off Guard As Weatherman Proposes During Live TV

The minute-and-a-half clip posted by Mark on Twitter has been viewed nearly 8 million times.

Psalms 30:11 "You have turned for me my mourning into dancing: you have put off my sackcloth, and girded me with gladness;"

WATCH: Mark Woodley Weather Reports Have The Internet In Stitches

This is what you get when you ask the sports guy to come in to cover a blizzard in the morning show. pic.twitter.com/h0RL9tVQqg