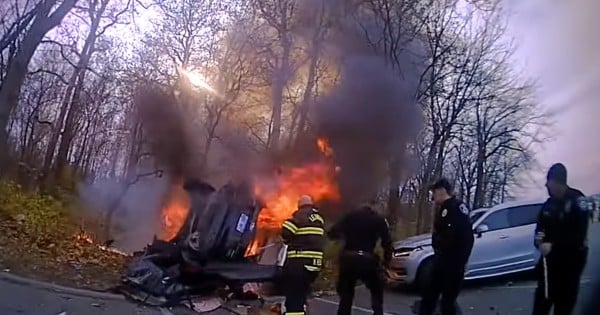 Time is of the essence for most truck drivers, but one angel truck driver took time out to help two accident victims who had been injured in a terrible crash!

Though truck drivers must be safe and have good driving records, they also know that miles covered equal income in one way or another. However, Tony Doughty from Greenville, Texas, interrupted his route to assist at a potential cost to him. But that's just what Tony is programmed to do!

RELATED: ‘Angel' Trucker Shows Up with a Hot Meal for Motorist Trapped on Interstate in Epic Snowstorm

Instead of calling 911 and continuing down the road, Tony had to stop when he witnessed a red car, driving at approximately 70 miles per hour, crash into a Jeep outside Albuquerque, New Mexico.

Tony Doughty was traveling east on Interstate 40 and saw the accident take place in the westbound lanes. He watched the car crash into the concrete median and the Jeep flip over. And the angel truck driver immediately pulled over to help!

Tony is an experienced truck driver with 15 years of service in the field and an impressive two million safe driving miles behind him! But, besides working for Bay and Bay Transportation, he's a 12-year volunteer firefighter.

With his EMT bag in hand and about to cross the highway, Tony ran into a police officer who'd also stopped at the accident site. When he learned of Tony's experience as a first responder, he put Tony to work!

Tony Doughty attended to the driver of the red Chevy, splinting his broken leg and stabilizing him-he told Tony that he was either withdrawing from or experiencing an overdose of fentanyl or methadone. He then checked on the woman in the Jeep, still overturned on the road. Fortunately, she was scared but not seriously injured.

Tony worked with the officer to communicate vitals to the 911 operator and stayed at the scene until the ambulance arrived, loaded the two injured drivers, and headed to the hospital! That's going above and beyond!

Alabama sings a song that describes Tony and others like him perfectly. You probably already know the one!

The Truckload Carriers Association started the Highway Angels Program in 1997 to recognize courtesy, kindness, and courage within their ranks. And the angel truck driver Tony Doughty now joins 1,300 other professional truck drivers who have been named Highway Angels!

"I wear two hats. I'm wired to stop and help in situations like this," said Tony. We're sure glad that you are, Tony!

YOU MAY ALSO LIKE: Truck Driver Dad Spots A Frantic Father On The Side Of The Road And Stops To Help

Praise the Lord, you his angels, you mighty ones who do his bidding, who obey his word. Psalms 103:20

LISTEN: Stranded Motorists Were Hungry So Driver Hands out Bread | Man Found In Ditch And Carried To Safety