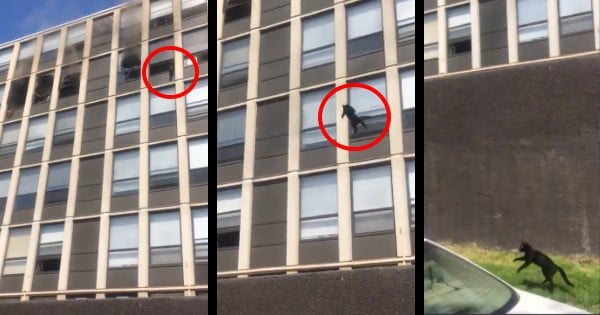 Imagine finding nearly a dozen raccoons stuck in a dumpster! Well, that’s exactly what happened to Robert Acton one morning when he heard a strange noise.

While making a delivery early one morning, a Florida truck driver Robert Acton overheard a noise nearby that caught his attention. Upon further inspection, the man discovered a small family of baby raccoons that had crawled into a dumpster and had gotten themselves stuck.

And so, he decided to help them get out.

Truck Driver Steps In To Help Family Of Raccoons

Robert rescued a group of raccoons out of this very same dumpster the week prior, So he decided to reach out a helping hand yet again.

Opening the lid, Robert found yet another group of raccoons stuck in the dumpster and in distress. After a closer look, Robert realized that this group of raccoons happened to be 10 babies, including one all-white albino raccoon.

Robert pulls out his phone and begins recording a video to document the experience (which can be found below). He tells the camera "We should always be kind to mother nature, I’m gonna help these little guys".

Robert then places a wooden pallet into the dumpster and stands back to watch the stuck raccoons escape to freedom. The babies emerge from the trash one by one and scurry back to where they came from. The good samaritan told reporters “I’d hate to think of a compactor coming and throwing them in the back. That wouldn’t be good.”

It's people like these, and the actions they choose that can make the world a better place. The Bible tells us all God's creations are good, and thus should be treated with a similar amount of love and respect. And America's little "trash pandas" are no exception. A friendly reminder for those of you reading to keep a lid on your trash and dumpsters, so we can help keep our furry friends, like these raccoons, from getting stuck.

YOU MAY ALSO LIKE: Severe Mange Left This Bear Practically Unrecognizable Until Angels Stepped In

“So God created the great sea creatures and every living creature that moves, with which the waters swarm, according to their kinds, and every winged bird according to its kind. And God saw that it was good.” Genesis 1:21