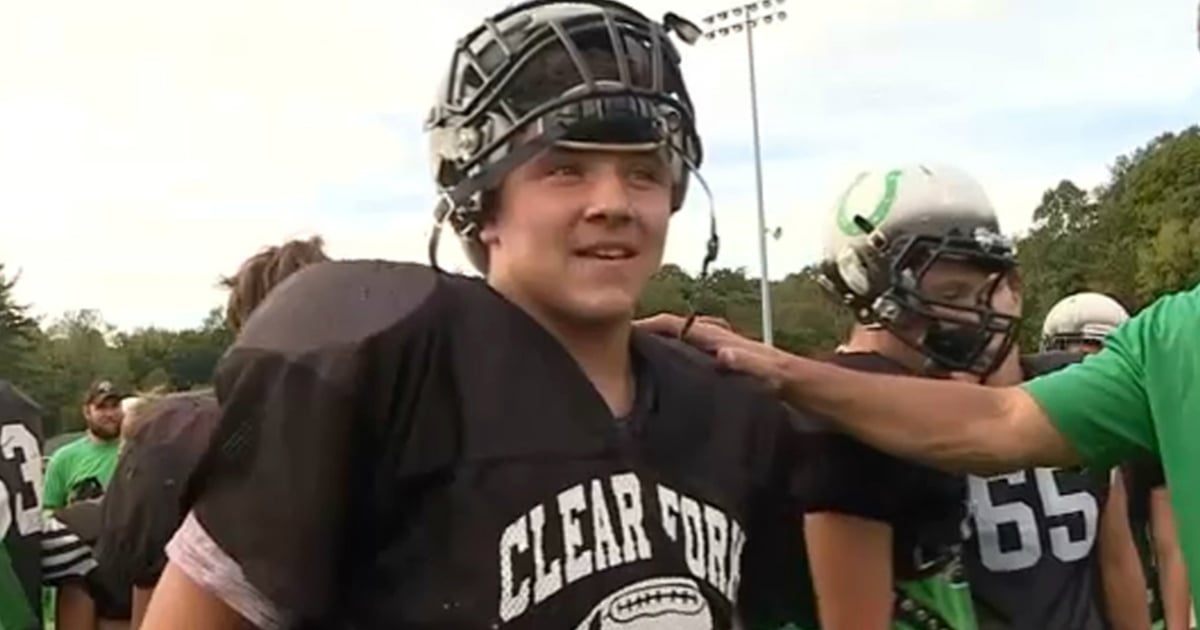 Football coach Keanon Lowe of Oregon had only moments to react in an “active shooter” situation inside the high school where he works. Security cameras caught him bravely disarming the troubled student. But it was Keanon’s compassionate hug afterward that makes this story so inspiring story!

School shootings have become all too common and present a serious risk to kids today. So, it’s no wonder people are calling coach Keanon Lowe of Oregon a hero. But it’s the compassion he showed after grabbing the gun that really stands out.

"I think it says a lot about his character," security expert Bruce Alexander said. "It's a remarkable feat."

The dramatic events unfolded at Parkrose High School in Portland, Oregon. An 18-year-old student named Angel Granados-Diaz came to school with a shotgun hidden under a garment bag.

Angel intended to kill himself. The gun held just one shotgun shell meant only for him. The troubled teen had decided to commit suicide at school so that his mother wouldn’t have to be the one to find his body.

It’s heartbreaking to think of the state of mind this young man was in to come to school with these plans. But thankfully, God had other plans for him!

As it turns out, a student had reported some of Angel’s “suicidal statements” to school officials. Coach Keanon Lowe, who also served as a security guard at the high school, was already on his way to go get Angel and bring him to the office so they could talk.

Keanon got to the classroom first. And God had the coach right where he needed to be to change the course of this young man’s life!

Keanon was by the door, asking the teacher about Angel when the student entered holding the gun.

"The door opens,” Keanon explained. “I'm within arm's length of the door, about 3 feet away from the door, and there's a kid with a gun, a shotgun.”

According to the district attorney, Angel turned the gun on himself and tried to fire. Only, the gun didn’t discharge. And that’s when Keanon Lowe, Oregon hero, grabbed the shotgun.

Keanon backs into the hallway, passing the gun off to another teacher while keeping a hold on Angel.

Next, in a powerful moment caught by security cameras, the high school football coach tightly embraces the troubled teen.

“Then it was just me and that student. It was a real emotional time. It was emotional for him, it was emotional for me,” Keanon Lowe said. “In that time, I felt compassion for him. A lot of times, especially when you're young, you don't realize what you're doing until it's over.”

Keanon’s words of encouragement were just what Angel needed to hear, right when he needed them most. And that’s no coincidence.

Angel (now 19) later explained how he was in the midst of a mental breakdown. Distraught and depressed over a recent break-up, he’d decided to end his life.

Angel didn’t want his mom to have to find him. So, the teen decided to do it at school.

Thankfully, God made sure he didn’t succeed.

When you look at all the things that happened to keep this young man from ending his life, you can see God’s fingerprints all over.

"I think I've gone through stuff in my life that prepared me for that moment…” Keanon said. “I'm happy that I was in that classroom for those kids and I was able to prevent that tragedy."

Keanon Lowe’s placement was no coincidence and had nothing to do with luck. It was divine design. God put the right person in the right place — not only to prevent a tragedy, but to display the compassion necessary to show the troubled teen his life mattered.

Angel Granados-Diaz pled guilty to unlawful possession of a loaded firearm in public.

"He is deeply remorseful for the pain that he has caused his family, his friends, and the community," Angel’s defense attorney, Adam Thayne told the judge. "[He] has a lot of people who care about him, despite what he thought back in May.”

Angel Granados-Diaz received 36 months of probation and will receive any type of mental health treatment he needs in the future.

"This sentence is appropriate as it affords ongoing supervision and safeguards and simultaneously affords Mr. Granados-Diaz with an opportunity to move past this incident so that he can continue to heal," deputy district attorney Parakram Singh said.

YOU MAY ALSO LIKE: 2nd Grader Sees Boy With Autism Crying On 1st Day Of School And His Compassion Is Going Viral

It’s amazing to see how God can work. And we’re so glad the heroic and compassionate actions of Keanon Lowe saved Angel’s life that day!