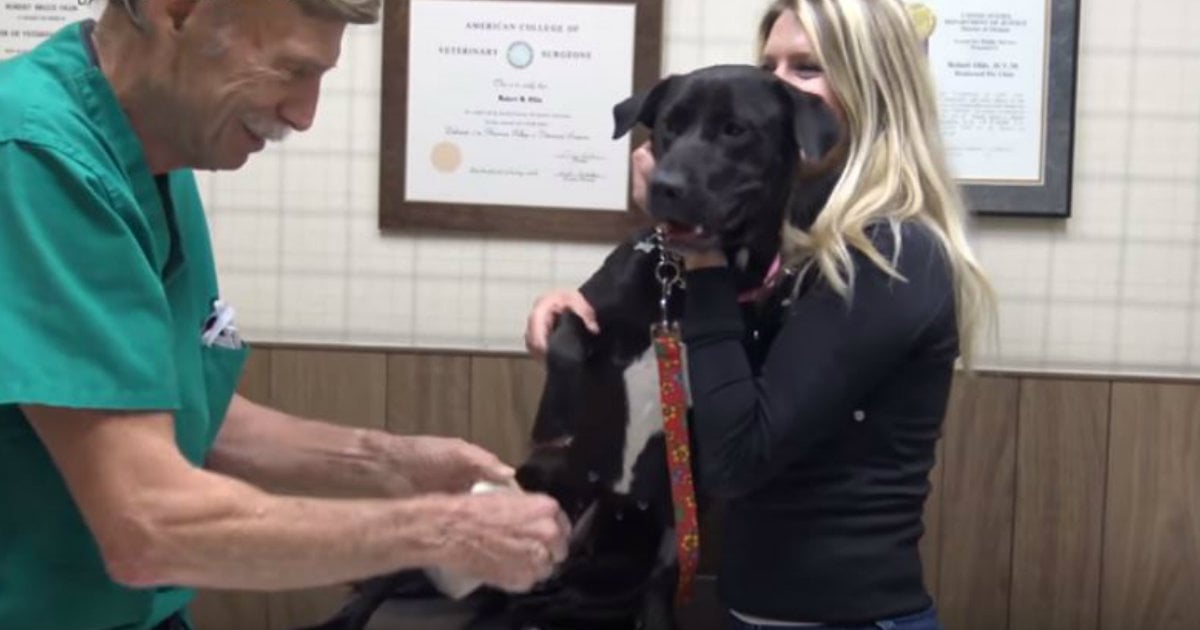 An Abandoned Dog Was Caught In A Coyote Trap, But The Rescue Team Saved Her Leg
Read Article »

In London, an eight-foot fence used to be just your ordinary, run-of-the-mill fence. Now, though, what’s missing tells the miraculous, yet bizarre true survivor story of a cat impaled by two metal posts!

Strangers walking past a metal fence in a suburban part of London made a gruesome, yet miraculous discovery. There on top of the eight-foot-tall railing sat a cat named Skittles. Somehow, poor Skittles found himself skewered by two of the fence posts!

RELATED: True Survivor Story Of A Dog’s Miraculous Recovery After Being Skewered On A Pole

According to his family, Skittles is a tough but loving cat who enjoys roaming about outside. But after all he’s survived, he’s a miracle cat! And this story is both bizarre and amazing all at once.

True Survivor Story Of A Cat Impaled On A Fence

No one knows exactly how Skittles wound up impaled on the metal fence. It may have happened as he was jumping from a nearby balcony. Or, perhaps he fell. There’s also a chance it was no accident at all, but the work of a London-area criminal called the Croydon Cat Killer, known for mutilating and publicly displaying animals (how terrifying!).

However he got there, no one who saw the grisly scene could believe the poor ginger cat was still alive. Good Samaritans called for help immediately, and rescuers rushed over to help.

"When I got there I was incredibly shocked,” said Nicole Broster, Deputy chief inspector for the Royal Society for the Prevention of Cruelty to Animals (RSPCA). “In all my years with the RSPCA I have never seen anything like it. This poor cat literally had two metal posts protruding through his body. I was amazed that this lovely affectionate boy was still alive and I knew I had to get him urgent help in order to give him the best chance of survival."

But how on earth were they going to free the impaled cat without killing him in the process?

True Survivor Story Of A Cat Impaled: Getting Him Down 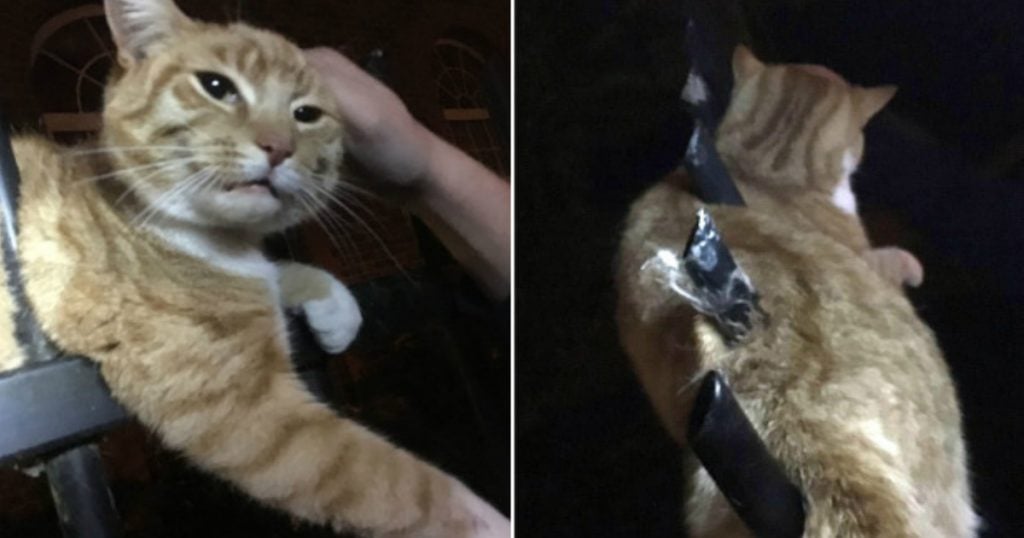 Nicole knew there was no way she could get Skittles down without doing further damage. So, she did all she could to console him while she called the fire department.

"He was so brave, continuously purring and nudging me whilst I comforted him despite his horrendous ordeal," she said. "The only time he ever cried was if I had to leave him to help with his treatment."

RELATED: An Abandoned Dog Was Caught In A Coyote Trap, But The Rescue Team Saved Her Leg

Rescuers used the same car-crash rescue machines used in terrible accidents. They cut away the section of the fence holding Skittles, being sure to take a large chunk because of how hot metal can get during the cutting process. Then, they helped get the injured cat to the emergency animal hospital.

"The fire service was absolutely fantastic and I cannot thank them enough," Nicole recalls. "Not only did they cut the railings, they also transported the cat to the nearest vets as the railings wouldn't fit in my vehicle. They even stayed to help at the vets by holding up the heavy railings so I could comfort the poor cat while the vet examined him and prepared for emergency surgery."

True Survivor Story Of A Cat Impaled: A Miraculous Discovery

As the veterinary staff went to work on Skittles, they were amazed by what they found. One of the posts pierced through the cat’s back leg and the other, his abdomen. But miraculously, the thick spikes narrowly missed all his vital organs!

"It's an absolute miracle that this cat is alive, and even better, it's looking like he won't even have to have the damaged leg amputated," Nicole said.

After several surgeries, Skittles was doing well and on the mend. The vet was even able to save his back leg! 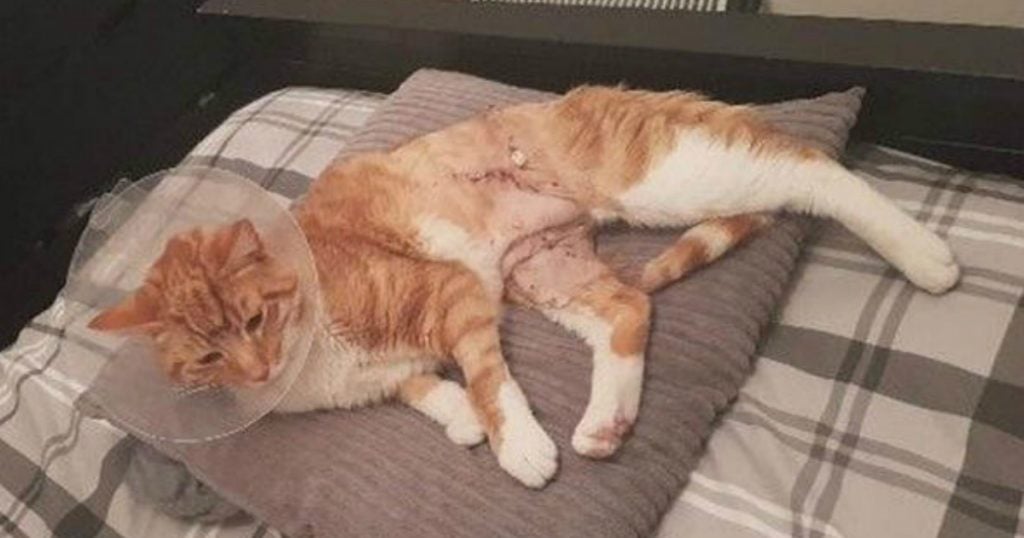 With no collar or microchip, no one knew who this tough survivor belonged to. The brave kitty got plenty of love and attention at the RSPCA while Nicole continued searching for his home.

At first, 27-year-old Shanakei Forde wasn’t too worried when Skittles didn’t return home right away. The 4-year-old outdoor cat spent most of his time outside roaming about before popping back in. But after a day or two, Skittles still hadn’t turned up and Shanakei was desperate to find him.

She started by making lost posters. That’s when a neighbor tipped Shanakei off about the terrifying ordeal with the fence.

"He heard about it at a residents meeting and told me the good news that he'd been found, but that he'd been injured," she said. "When I saw the pictures I couldn't believe my eyes, I didn't believe that was him - it was so shocking."

True Survivor Story Of A Cat Impaled: A Happy Ending 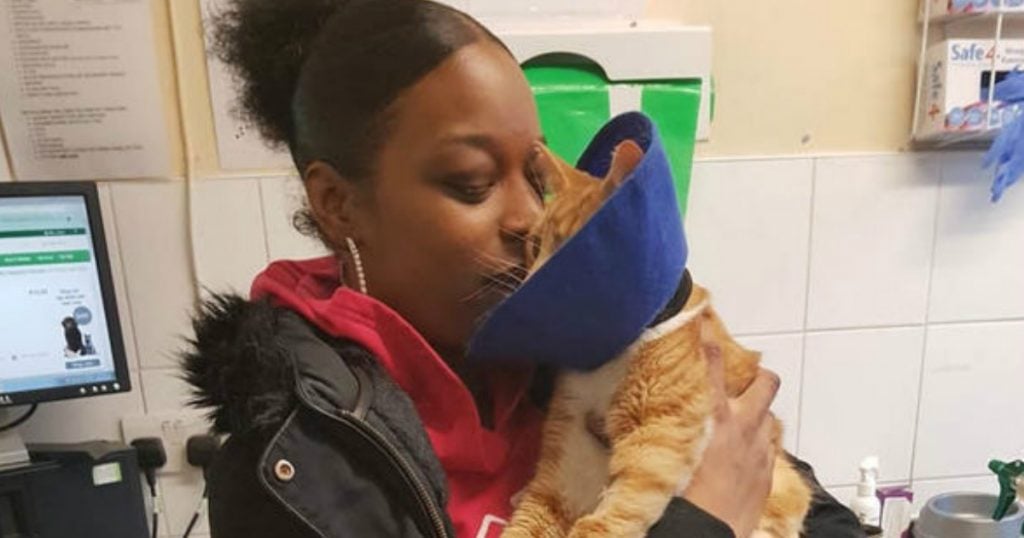 The mother-of-two went and picked up Skittles, delighted to bring him home and reunite her kids with their “best friend.”

"He’s a bit shaken up, but he’s happy to be home,” Shanakei said.

As awful as his accident was, it’s inspiring to see how everyone joined together to help in this true survivor story of a cat impaled on a fence. The RSPCA, fire department, and vetrinary hospital all worked together flawlessly. And friends, family, and even strangers are chipping in to help Shanakei with Skittles’ expensive and completely unexpected medical bills via a fundraising site.

WATCH: True Survivor Story Of A Cat Impaled On A Fence

God loves all of His creation, both big and small. Seeing His hand in the story of Skittles the miracle cat is truly inspiring!

"For every beast of the forest is mine, the cattle on a thousand hills. I know all the birds of the hills, and all that moves in the field is mine." Psalm 50:10-11

RELATED: Angel Saved Man From Being Impaled When Pipe Flew Through Windshield