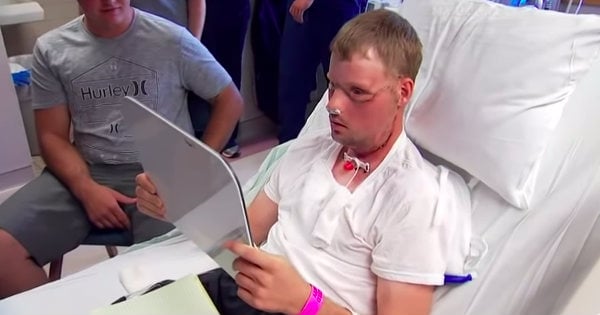 Andy Sandness Story: Before And After His Face Transplant
Read Article »

Texas man Jay Brent died one day in the middle of a church service but the Lord brought him back from the dead.

The miraculous event only served to bolster Jay’s faith. But it also left him wondering why he didn’t get to see Heaven while he was gone. Then, God revealed the wonderful reason in a moment of prayer!

Many people report seeing glimpses of Heaven after coming back from the dead. Some accounts have even inspired movies, such as the film Breakthrough, based on the testimony of Joyce Smith and her son John.

But that wasn’t the case for Texas man Jay Brent.

Jay passed away in the middle of a Thursday night church service at Trinity Fellowship Church while sitting next to his wife, Chonda.

"I looked over at him and his gaze was set," Chonda recalled. "That's the only way I know how to describe it."

Church members immediately started praying for a miracle as the pastor cried out for medical help.

"I just got down on my knees in front of him and started praying," Chonda said. "That's the only thing I knew to do. I was just pleading with the Lord not to take him."

Jarett Warren, a medic, was also at the service. And he immediately rushed to where Jay and Chonda were sitting when the pastor yelled for help.

"At that point, I looked a Jay and knew he wasn't there,” Jarret recalls. "There's no palpable pulse. He wasn't taking any breaths, he wasn't breathing — he was dead."

Jarret pulled Jay’s limp body into the aisle so he could try to save him. But before he could even begin CPR, the Lord brought Jay back from the dead!

"He just takes a deep breath and opens his eyes," Jarret said.

Coming Back From The Dead

Jay has been to several doctors and had multiple tests done, none of which can explain what happened to him. And Jarret Warren knows he had nothing to do with the miracle of Jay coming back from the dead.

"It's divine intervention," he said. "It was the Lord at work and I believe in that with all my heart. In fact, that's the only way I can make it rational."

While Jay says he’s always been faithful, coming back from the dead gave his faith a powerful recharge. He already knew God performs miracles. But to experience it firsthand was something else!

But Jay did return with one question. Why hadn’t he seen Heaven or anything else in the moments he was gone?

Jay went to God in prayer with this question and received an answer.

"He just told me I wasn't ready to see Heaven in that way," Jay explained, "that I wouldn't have wanted to go back even though it wouldn't be my choice, but he had plenty of Heaven on Earth for me left. I wouldn't have been able to live my life knowing I left that behind."

YOU MAY ALSO LIKE: 20 Bible Verses To Cast Off Fear And Remind You That God Is In Control

WATCH: Testimony Of Coming Back From The Dead

What an awesome testimony and powerful reminder of the wonderful things that await us after this life!