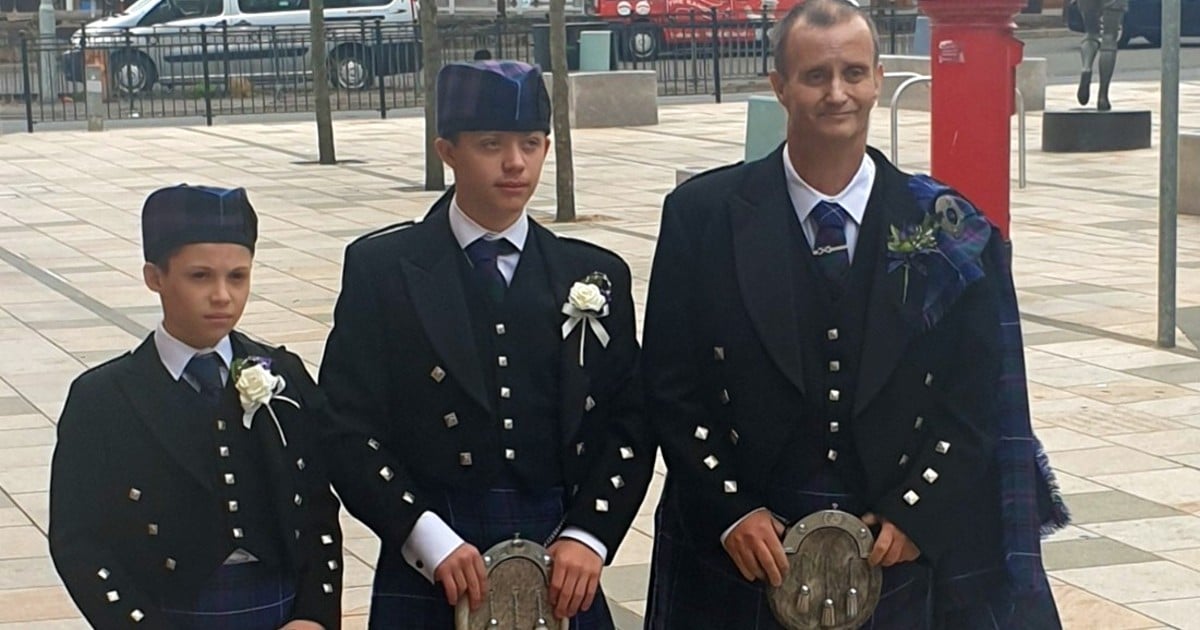 Detective Mike Blair met 7-year-old Ronnie Oneal IV following a traumatic event no child should ever endure. But God had a powerful reason for bringing them together!

Kenyatta’s boyfriend, Ronnie Oneal III, was later convicted for murdering her and her daughter soon after the call. He also stabbed their son, Ronnie Oneal IV, and tried setting him on fire.

"By the time I arrived that night, we were told there was a child being medevacked to Tampa General, but he was not expected to live," Mike recalled.

Thankfully, Ronnie Oneal IV did survive. And while Detective Mike Blair didn’t have much involvement in the criminal case against his father, it turns out God brought him on the call that night for a much bigger reason!

Ronnie Oneal IV had a lot to overcome following that horrible night. And Mike began visiting him at the hospital as he recovered. He’d bring along souvenirs from the local football team, the Tampa Bay Buccaneers. And through such simple gestures, a special bond began to form between the two.

One night, Ronnie asked Mike if he would stay and watch a movie with him.

"He kind of held on to my hand as I left, and he said, ‘Could you watch a movie with me?’" Mike Blair explained.

The police detective could have declined — he already had date night plans with his wife. But instead, he called his wife and she agreed to do a movie night with little Ronnie. And that’s when God’s will started becoming clear to Mike and his wife, Danyel Blair.

"I had already known that I would want to take Ronnie home with us, starting that night," Danyel recalled.

Danyel began praying for God to make a way to bring Ronnie Oneal IV into their family. She and Mike already had five children of their own and they, too, wanted to take in Ronnie.

"My kids had come to me at one point in this period of time and said to me, ‘Dad, you just need to go with mom on this; we need to start fostering,’" Mike recalled.

Mike mentioned to Ronnie’s court-appointed guardian to call him if Ronnie ever needed anything. And since Ronnie was already staying with other family members, that could have been the end of it.

But God had other plans for this precious boy!

One day, Detective Mike Blair received a phone call from the court-appointed guardian. And it was divine timing, for sure!

"When I got the phone call, I was driving, and I was driving by our church and the guardian was asking, ‘Do you know of somebody who can help us out?’" Mike explained.

By this point, Mike and his entire family knew Ronnie Oneal IV belonged with them. They opened their home and their hearts to the little boy who’d been so through so much. And they all supported him, teaching him a special family mantra he could repeat whenever he feels stressed:

Ronnie Oneal IV spent time in the hospital for physical healing. But God sent him to this new home for a much deeper type of healing. But just because he has a new family who loves him deeply, he won’t ever forget the loving mother and sister he so tragically lost.

RELATED: Drug Addict Finds God After A Murder and Her Own Grandkids Opened Her Eyes

Ronnie won’t let the murders and trauma define his mother’s and sister’s lives. Kenyatta Barron was working on finishing her education at the time she was killed. But Ronnie remembers how she always took time out for her son.

"She was just a good mom,” he said. “We did like a lot of things together.”

His sister, Ron'Niveya, was severely handicapped and confined to a wheelchair. But her bright spirit and positive attitude shone through, frequently earning her recognition at school.

"There is this [honor] called ‘terrific kid' and she got that a lot," Ronnie recalled.

Unspeakable violence may have ripped this family apart, Ronnie will always carry his mother’s and sister’s memory in his heart. And there’s no doubt they would be glad to know their beloved Ronnie Oneal IV is now being cared for by such a loving family. He’s right where his Heavenly Father wants him.

"The easiest way to surmise the whole, this is - it's been a God thing for us," Mike Blair explained.

YOU MAY ALSO LIKE: 6-Year-Old Witnesses Double Shooting of Mom & Dad And Family Forgives the 2 Men Who Did It

There will always be tragedy while living in this broken world. But the story of Ronnie Oneal IV reminds us God can use all things and bring beauty from the ashes!