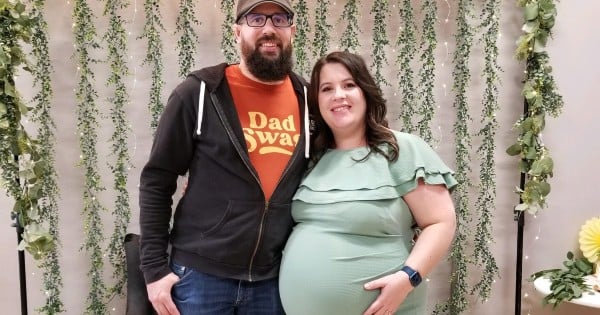 Identical triplets born to 46-year-old Audrey Tiberius, even after one doctor said it would never happen, have the mom rejoicing. Her prayers were answered in more ways than one!

RELATED: Couple Decides To Try For 1 More Child And Is Blessed With 3 Identical Triplets Instead

A doctor told her in her forties that her "eggs were too old," and she would never conceive again on her own. She even went through several rounds of fertility treatments. Yet each round failed. But she still held her prayers close to her heart and God even closer.

“I prayed and prayed for five years to have more children because I always wanted a really big family, and seven was kind of my number," Audrey said.

Even though it seemed like her prayers for a bigger family seemed to go unanswered, God was already at work.

When Audrey and her husband Tyler assumed the doors had been closed to expanding their family, God showed up in a miraculous way. Audrey learned she was pregnant.

Not only did she conceive naturally, but she was also carrying three baby boys! The identical triplets were born and the couple named them Sky, River, and Bay.

But this is where it gets really good!

“The odds of this happening are so incredibly rare that to me it just has to be a miracle,” Audrey said.

The saying is true, God does answer prayer. It may not be how we imagined, nor may it be on our timelines. Audrey had prayed for five years. Yet, in God's goodness, he answered her prayers in a way that no one can dispute as it being miraculous. We can only look at Audrey's story and praise God for his wisdom, love, goodness, and timing. What a beautiful, reassuring reminder of God's promises.

"Come, let us tell of the LORD's greatness; let us exalt his name together," Psalm 34:3.

WATCH: 46-Year-Old Mom Rejoices After Her Identical Triplets Are Born