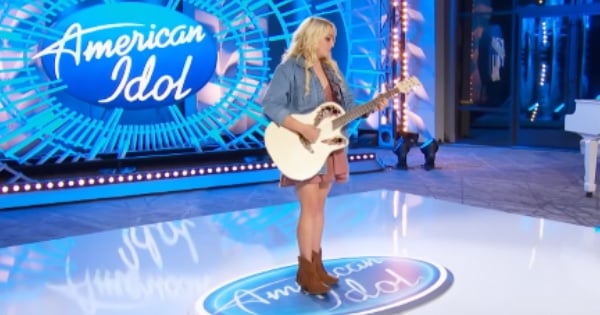 Before 18-year-old Delaney Wilson on American Idol impressed the judges with her golden voice, she unexpectedly went viral on TikTok as a singing babysitter. And her story goes to show what a difference it can make when you have someone who believes in you!

Nicki Maher is a mom influencer who begins the video humorously saying, "mom check." She shows a bunch of people in a room and says they are living their dreams. It is her babysitter Delaney's turn to audition.

Ryan interviews the two and Delaney shares how Nicki secretly filmed her as she was singing while babysitting. The video went viral and Delaney did not realize how she sounded. Nicki, the mom encouraged her along the way and asked if she could post the video and Delaney said ok.

The video ended up having 18 million views. Nicki says that American Idol contacted them and she told Delaney Wilson that this was her chance.

Delaney walks in with a young man on guitar and sings Opportunity by Sia. As she sings angelically, the judges each smile. She sings about the gift of this moment. After she finishes, Delaney adorably grins at Nicki and the judges applaud.

They tell her it was amazing, that she has youthfulness but they want to help her rough up the edges to help in the competition. They said, "Way to lose your babysitter." Nicki replies, "It's alright, we'll share her with the world." As they tell her that her life is going to change and that she is accepted, she and Nicki embrace and cry tears of joy.

Because of this mom, this young woman is living out her dream. We each need that kind of empowerment too. When we have Christ, we know that He champions us in our gifts and callings to honor Him and worship Him through our own stories.

We can be encouraged by this relationship knowing that we too are being cheered for every day by our God to run this race.

YOU MAY ALSO LIKE: Guy Singing In Gas Station Absolutely Blows Shoppers Minds With His Incredible Voice

“I press on toward the goal for the prize of the upward call of God in Christ Jesus.” Philippians 3:14