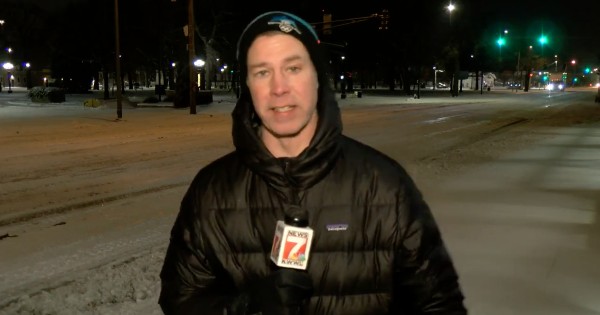 Fox 4 News anchor Pat McGonigle couldn’t resist having a taste during a live food segment. However, the minute the tapioca dessert hits his lips, you can tell the reporter instantly regretted his decision. And it wasn’t long before the hilarious footage started going viral!

A news anchor at Fox 4 News in Kansas City, Missouri, tried a piece of food on live TV during a New Year's Eve preview segment. And his face told the entire story. Words were not necessary! He was clearly not a fan of whatever piece of food he popped into his mouth the video plainly shows.

RELATED: NBC News Reporter Spots A Herd Of Bison Headed His Way And His Reaction Is Priceless

The video begins with the station's anchor, Pat McGonigle, and another man standing behind a table filled with delectable-looking food. The segment previews the food around the Kansas City, Missouri area for New Year's Eve.

The second man is Food & Beverage Journalist Dave Eckert, an expert in this field. He starts describing the dishes in incredible detail, including the price. The camera then gets extreme close-ups of the delicious-looking plates of food.

RELATED: Son Tries To Film A News Report For TV But Gets Interrupted When His Mom Stops By To Say Hi

The food and beverage journalist continues to talk about the many dishes on the table. However, at about the 1:20-minute mark, the station's anchor asks a question he would ultimately regret.

He asks, "Mind if I wolf one down?" He proceeds to grab a piece of food and pops it into his mouth. He only chews the food a couple of times until he stops and his discomfort is very apparent.

Things go from bad to worse for the newsman, who stands oddly silent and begins slightly turning, almost looking for a way out. At the 1:45-minute mark, the camera gets an extreme close-up of a shrimp dish. But we are still able to see the Fox 4 news anchor walk off-camera. A few seconds later, we hear what sounds like a trash bag, almost as if someone is spitting unwanted food into it.

At the 2-minute mark, the new anchor appears on camera and continues the segment.

You've got to hand it to both men in the segment. They are both pros and finish the food-preview segment.

During live TV, anything can happen, even getting a mouthful of food you don't enjoy.

YOU MAY ALSO LIKE: They Asked Sports Reporter Mark Woodley to Cover Weather in a Blizzard with Hilarious Results

Psalms 126:2 "Then our mouths were full of laughing, and our tongues have a glad cry; they said among the nations, The Lord has done great things for them."