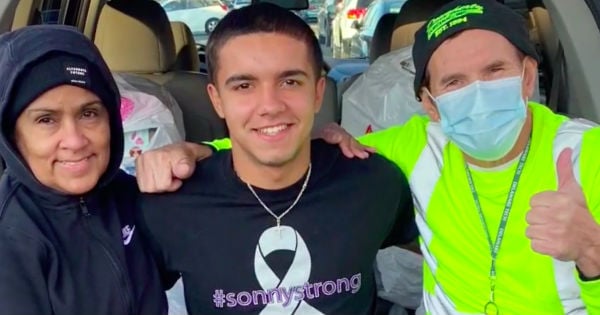 These are the positive news stories that were most popular with our readers this year. And after the craziness of 2020, these reminders of goodness and kindness are welcome.

RELATED: 7 Years Ago She Was A Patient At The Hospital And Now She's Giving Back $23,000

A woman in Missouri was relieved to have been given a ride after being found walking cold and alone down a highway. Later during her shift, the woman was shocked to see that same stranger greeting her at work. Find out what happened next when Brandon McNamee showed up on the scene.

After a panicked search for a missing 3-year-old girl, the girl‘s parents and search crew are relieved to hear her call out to the K-9 unit, "doggy." Read more about this terrifying search.

Woman describes seeing heaven after her heart stopped for 11 minutes. Miraculously she came back and told the tale. Read Charlotte Holmes' amazing story!

After an Alabama tornado ripped past a field containing three crosses one Easter morning, a powerful message remains as Christ‘s cross is the one still standing. Read more and see the photos of the aftermath of the tornado that left one cross standing.

Stranger steps up to care for a starving orphan after seeing his picture for the first time. You won't want to miss the full story of Priscilla Morse and her baby Ryan.

Sacramento police officers help out a struggling mother after finding her and her children living behind a Walmart. Learn about the blessing Shannon Loveless received when two police officers responded. . .with kindness!

Police Officer shares emotional testimony after a stranger covers her in prayer at the gas station. During a time when the nation was experiencing racial turmoil, a single act of kindness left Officer Lewis in tears.

Teen Kroger employee pulls out wallet after hearing senior citizen say they had to put groceries back. Teo Jordan didn't make much money himself, but that didn't stop him from stepping up in an incredible act of kindness.

This December a rare ‘Christmas Star‘ made its appearance in the Heavens. What a wonderful reminder of the hope that we have because of the birth of our Lord Jesus Christ! Read more about the Christmas Star!

YOU MAY ALSO LIKE: 12 Bible Verses Of Renewal To Keep God First In 2021

We hope that this look at the positive news from the year will uplift you and provide hope for the upcoming year. Even in the midst of a dark season, God shines His light and provides silver linings.